We got a tour with transportation and tour guide, in order to understand and enjoy all the magic around the Pyramids, the Sphinx, Memphis and Sakkara.

If you get the tour by the link below you help us to continue Flying With Flow!

THE ROUTE. WHAT TO SEE IN GIZA.

The first time we see the pyramids, such a crazy contrast, from ancient to modern, all mixed together. 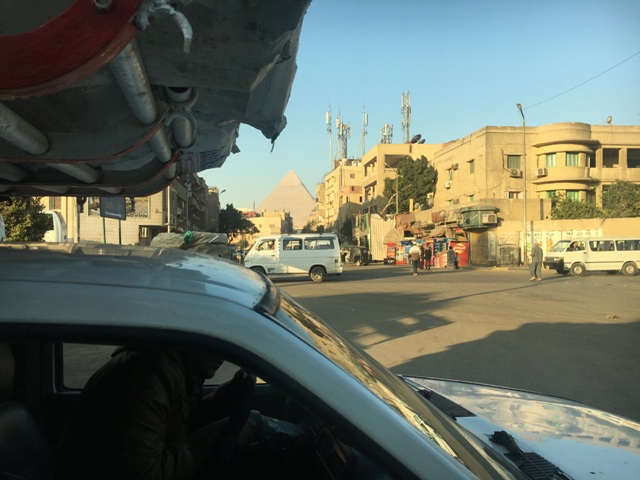 View of the pyramids from the van.

The line to get the tickets. As we already purchased the tour, our tour guide got the tickets quickly.

Important: It was not included the entrance to get into any pyramid, and we decided to get inside the Keops Pyramid. Then we got that ticket apart.

– Go visit early in the morning to avoid crowds and get the best pictures.
– 200EGP for a camel ride next to the pyramids, deal to get this/better price!
– It’s important to have a tour guide in order to understand/enjoy all the magic happened here. 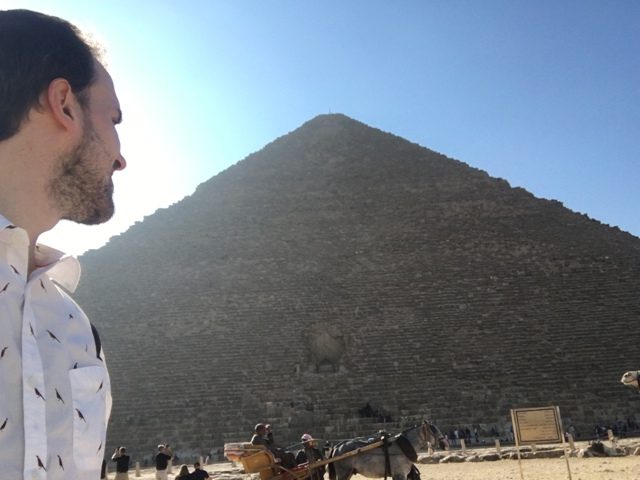 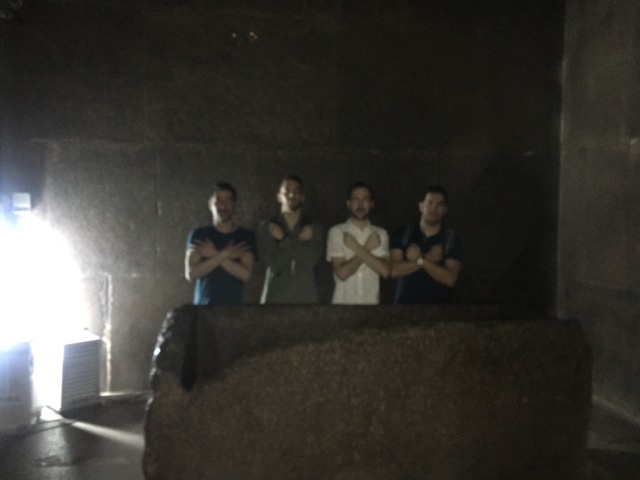 We got inside the Keops Pyramid, it is a, unique experience in life and one of the most amaazing experiences of my life.

Why? It is difficult to explain, so just check the video!

Inside Keops Pyramid !! ????
The King’s Chamber is just right in the heart of the pyramid with the Sarcophagus Tomb of Keops.
Get this point by climbing up hundreds of steps by narrow ascending passages. The unique ancient wonder of the world with more than 4.000 years of history and we are inside, part of the history. 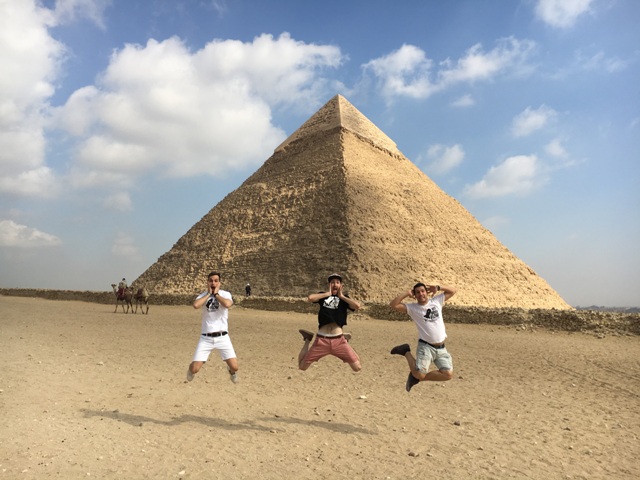 We can’t believe we are just right here, and we can’t imagine all what happened during thousands years in this exactly same sky and sand… 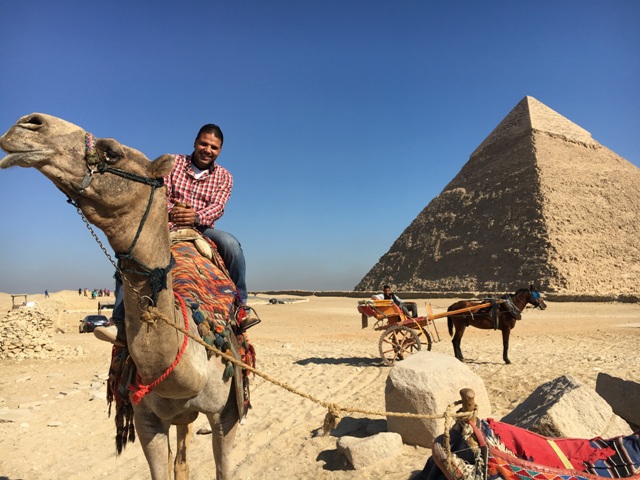 There is something better than kisses? Yes! Camel Kisses! Don’t know what happen with camels & me, they just want to kiss me or bite me…?
•
Would you dare to get camel kisses?
Always with the risk to get a bite, but worth it!
We want the FlyWithFlow CamelKissTeam!
And you can be part of it!
With love,

After having one of the most amazing/intense experiences of our life, to be inside the Keops Pyramid, we have a camel ride to get the best views of of the 9 pyramids. 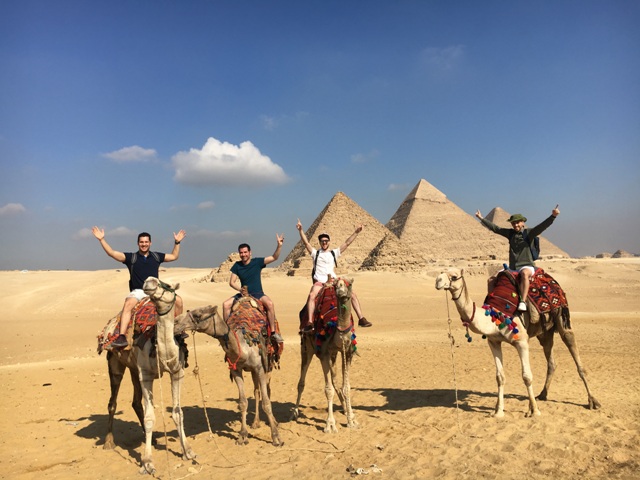 VIDEO RIDING CAMELS NEXT TO THE PYRAMIDS

I wish, just for a second, to see how was the life right here, hundreds years ago… Behind us, the view of the three main pyramids, from left to right: Keops, Kefren and Mykerinos.

CHALLENGE! FREE HANDS WHILE RIDING CAMELS IN THE PYRAMIDS OF EGYPT

Showing free hands cameldriver skills and…singing the FWF Song! Maybe I should’ve been a singer, or maybe a camel rider…?
•
Would you dare to free hands riding camels?
Camels are the new future transportation way!
We want the FlyWithFlow CamelTeam!
And you can be part of it!
With love,

VIDEO HOW TO BE THE BEST CAMEL DRIVER

There are 4 riders:
1. @camaleonidas
2. @ctorrejonperez
3. @cesarnavea
4. @flywithflow
.
And 4 camels:
– Robin Hood
– Michael Jackson
– Sugar
– Casanova
•
Could you guess what camel name is for what rider?
Try to guess it before watching the video! 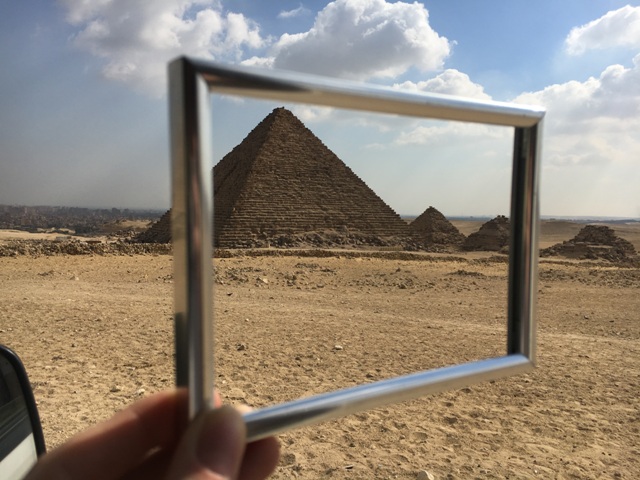 VIDEO BEST VIEW OF THE PYRAMIDS

Next to the pyramids area, we find the oldest known monumental sculpture by the Old Egyptian Kingdom. Our eyes and mind are getting already crazy with all the spectacular magic in one same day..

– Sphinx, a mythical creature with the body of a lion and the head of a human, which face is believed to represent the Pharaoh Khafre.
– 73 meters long and 20 meters high, built directly from the limestone bedrock.
– Sphinx, comes from the Greek mythology, represented as a monster with a head of a woman, the body of a lioness, the wings of an eagle, and a serpent-headed tail.
– Archaeologists believe that the face and body of the great Sphinx was painted red, the beard was painted blue and much of the headdress was mostly painted yellow.
– It is believed that it lost the nose because of Napoleon, but drawings from 18th century shows that it was before.
– The Sphinx is oriented to the east facing the sunrise of spring equinox rising sun near the 30th parallel.
– One of few constructions from the ancient Egypt that have no inscriptions on its surface, not a single symbol has been found on the Sphinx.
– The oldest known monumental sculpture built by ancient Egyptians of the Old Kingdom during the reign of the Pharaoh Khafra, 2558–2532 B.C. But some recent studies have suggested longer ago as 7000 B.C.
•

– Try to go early in the morning to don’t find crowds.
– Get a tour guide to understand all the relevant information surrounding this area
– Dress properly when visiting this kind of places.
– There are shops around to get drinks and souvenirs. 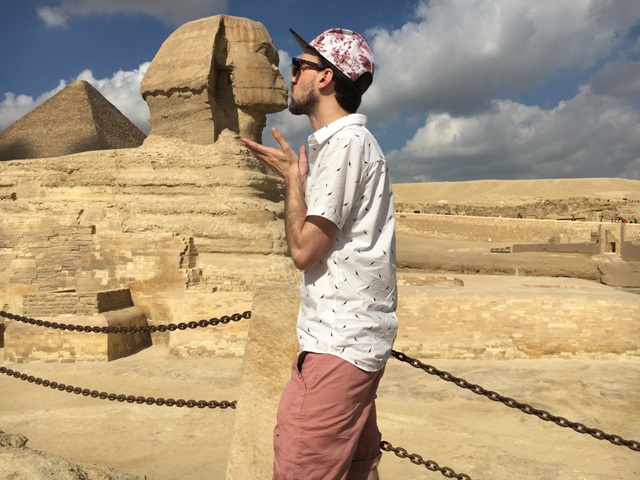 Best kiss of the story/history??
Sphinx already knows…
After thousands years ago…
The real taste of the Flow? 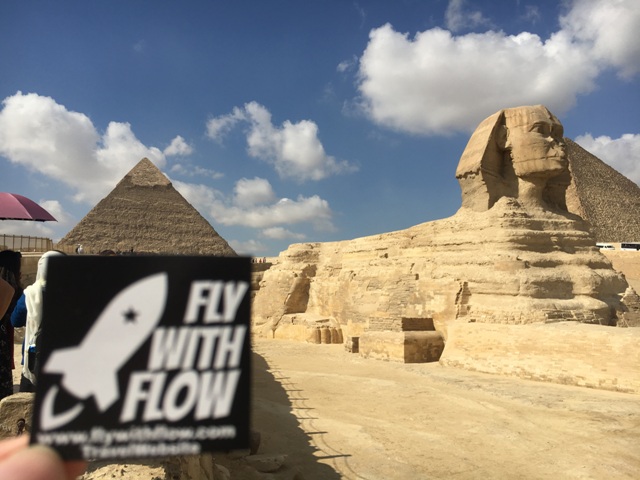 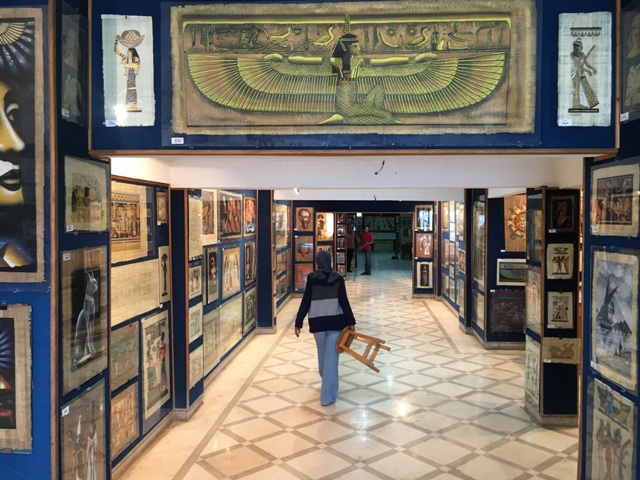 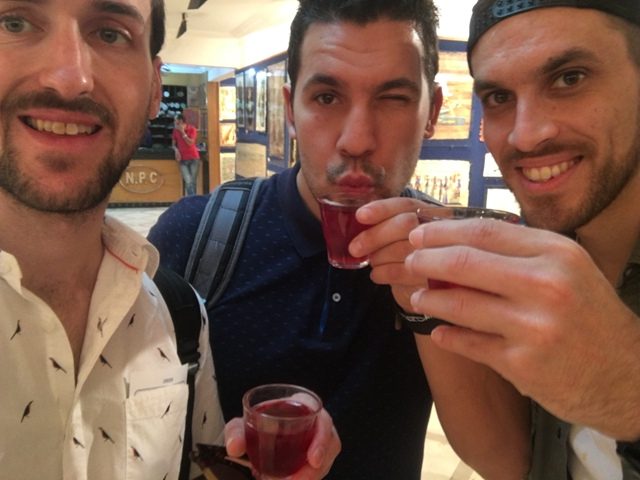 First Capital of Egypt, Memphis.
Looking with admiration the Statue of Ramses II (more than 3000 years old). Amazed by discovering all the magic of the pyramids we head towards Memphis as part of the tour day trip.
•

– We got a full day tour visiting The Pyramids, The Sphinx, Memphis and Sakkara.
– The tour was 50€ per person with a length of 8/9 hours, which included Spanish speaking guide, transportation, entrance fees and lunch.
– Discover the amazing Colossus Statue of Ramses II and the Alabaster Sphinx.
•

– Memphis was the first capital of Egypt.
– In ancient times here was the Temple of Ptah and the place of coronation of the pharaohs.
– The name during Old Kingdom was “Men-nefer” which means the enduring and beautiful, translated by the Greeks as Memphis.
– Founded by Menes (Narmer), the king who united the two lands of Egypt as a single country. 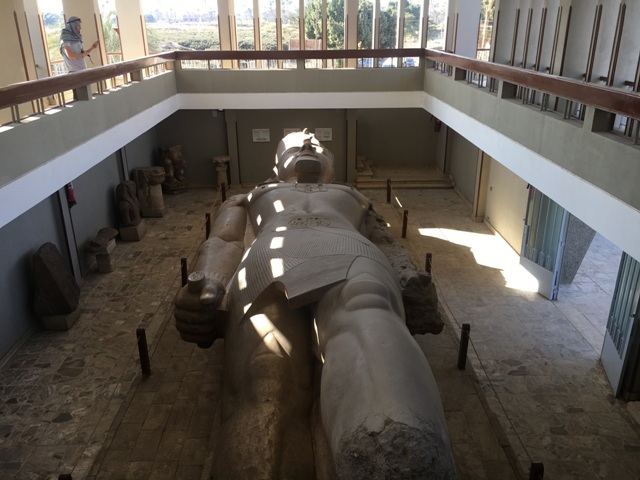 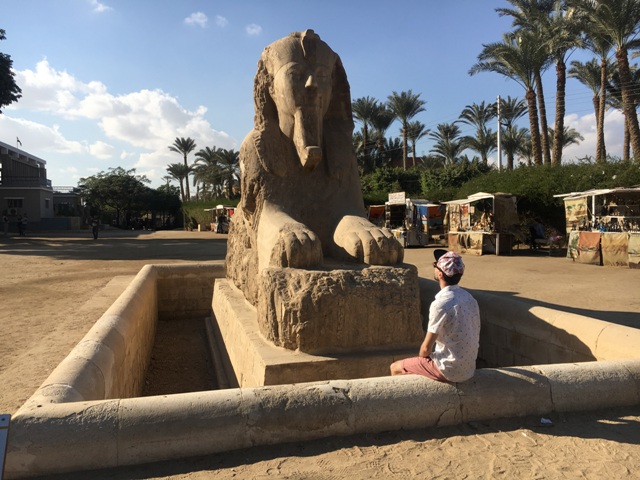 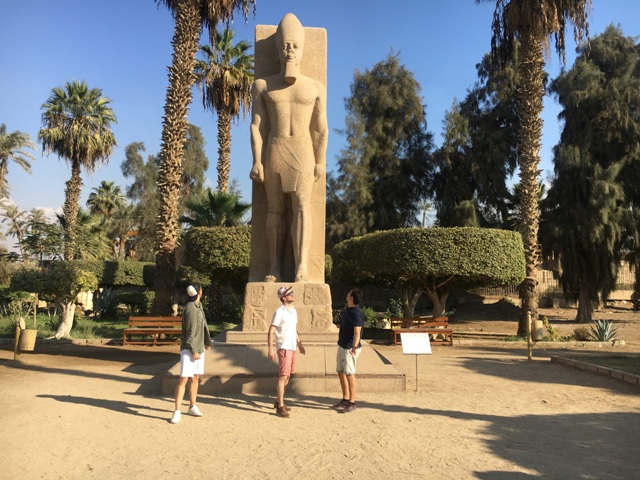 The First Pyramid. Known as “The Step Pyramid of Djoser”
•

– We got a full day tour visiting The Pyramids, The Sphinx, Memphis and Sakkara
– The tour was 50€ per person during 8/9 hours and included a spanish speaking guide, transportation, entrance fees and lunch.
•

– The first pyramid from 2650 B.C. is composed by six mastabas of decreasing size
– Dedicated to the Djoser Pharaoh and buit by the arquitect Imhotep
– It is the first stone monument of Egypt and of the world
– Originally was 62 meters high and the base 109 meters x 125 meters
– The enormous cemetery of the ancient memfis was an active necropolis for more than 3500 years
-The pharaohs of the ancient empire were buried in the eleven main pyramids of Sakkara 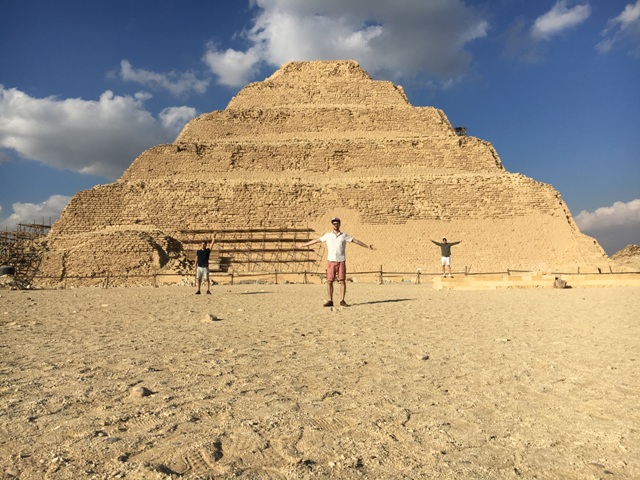 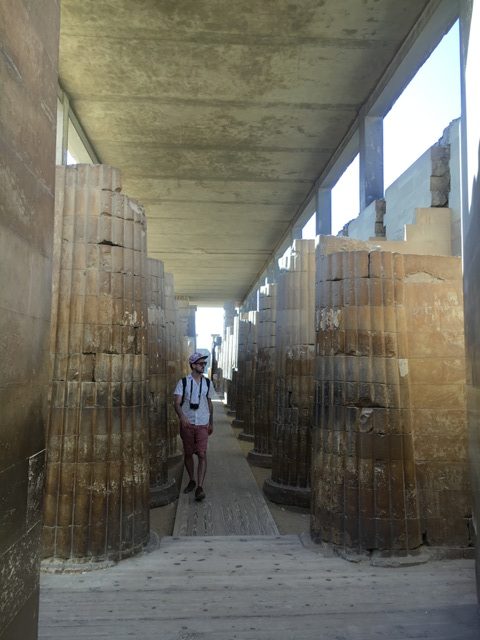 VIDEO THE FIRST PYRAMID OF THE HISTORY

The First Pyramid of History! ?

Thanks to: Cristiano Ronaldo

Places so unique and special, where there is also time for laughter and friendship, meeting our new best friend: Adriano!

Because FlyWithFlow, is characterized by combining spectacular places with the true essence and reality of the place, thus obtaining a complete and unique image of the destination. 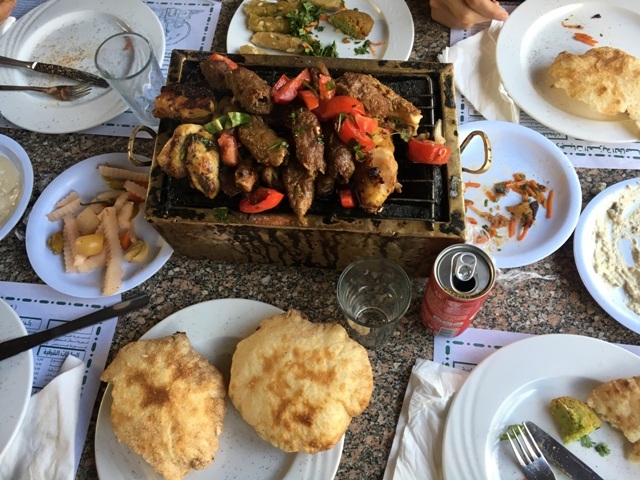 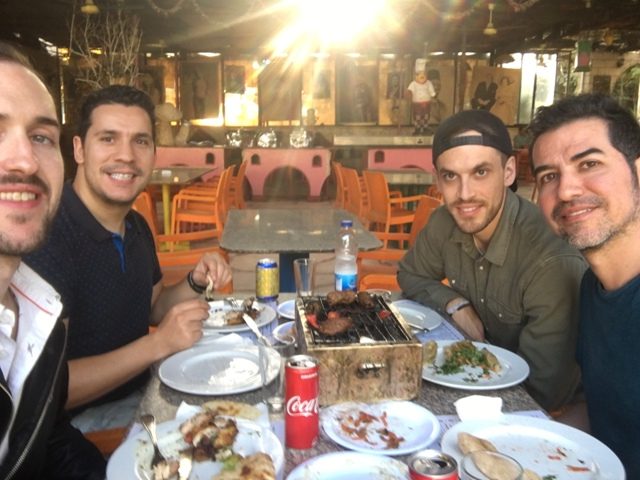 Egyptian Kisses!???
FlyWithFlow CHALLENGE !! ?
•
It’s not just about kisses, it’s about love. Love between cultures, love between religions…
Definitely love between people?
•
Full video in YouTubeChannel? (link in bio)
•
Would you dare to spread the love?
Give kisses and hugs, best thing in world!
We want the FlyWithFlow SuperLoverTeam!
And you can be part of it!
With love,

– Sunset with Pyramids best place is the terrace of the Pizza Hut! Get a pizza and drink for around 10€ and enjoy best sunset of your life
– It’s important to have a tour guide in order to understand/enjoy all the magic happened here.
•

– More than 4.000 years of history.
– The 3 pyramids are alligned with Constellation of Orion.
– Pyramids were originally covered with polished limestone looking white and with the top covered with special stone or even gold.
– Khufu pyramid was the tallest structure in world during more than 3800 years 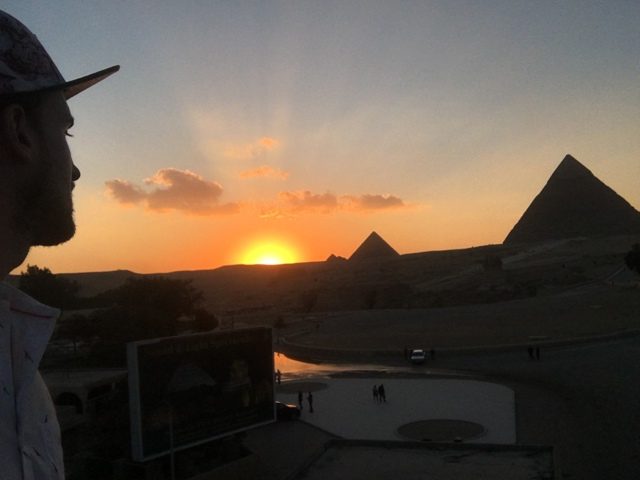 Best Sunset of my Life? ?
Thanks for this, God Rá!??
It’s not the end of the day…
It’s the start of a new one. New opportunities, new motivations and new goals!?

VIDEO BEST SUNSET OF MY LIFE WITH THE PYRAMIDS

Perfect closing to one of most special days of my life.
Now everything is different…
Yes, all is different after the pyramids…
After exploring and learning the Egyptian magic, all have changed in consideration and relevance.
It definitely broke my mind and make me see the things in a different way. Everyone should see this once in life… 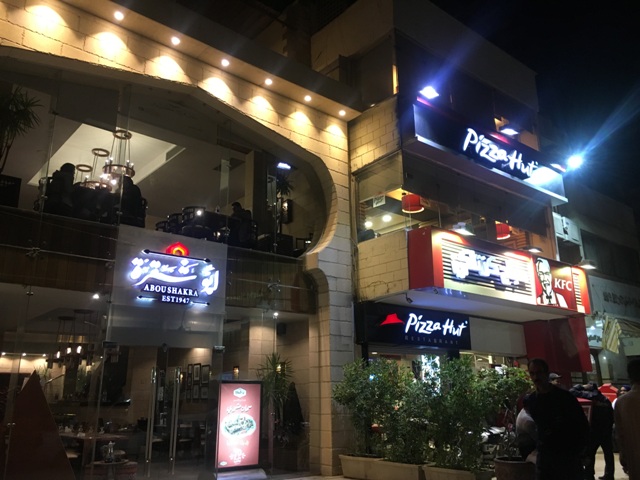 When the night arrives, there is a light show with the Pyramids and Sphinx, and the best way is to enjoy it for free from the terrace of the Pizza Hut!

Back in Cairo city, I called mom to say that I am fine and that it was one of best days of my life! 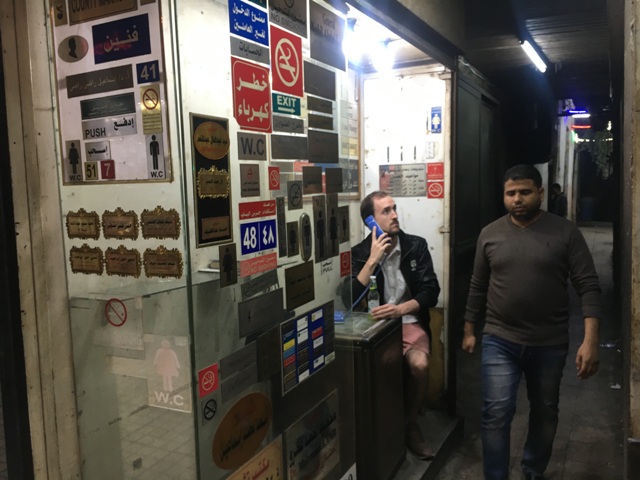