BEST TOURS AND ACTIVITIES IN FLORENCE AND BOLOGNA

These are the activities that I mostly recommend you in Florence and Bologna with Civitatis.

Follow in the footsteps of Michelangelo, Da Vinci, or Botticelli in the Renaissance city on this Spanish walking tour of the historic center of Florence. Art and history in its purest form!

Fall in love with the interior of one of the jewels of the Italian Renaissance with this guided tour of the Florence Cathedral. Complete your visit also discovering the Baptistery and the Cathedral Museum.

The capital of Tuscany treasures in its historic center a series of extraordinary mysteries and legends. Discover their stories with this night walk in Florence.

Discover Bologna with this walking tour that will take you to know the Red City in depth while you walk its streets and visit its most emblematic places.

Click here to get this route in your Google Maps: 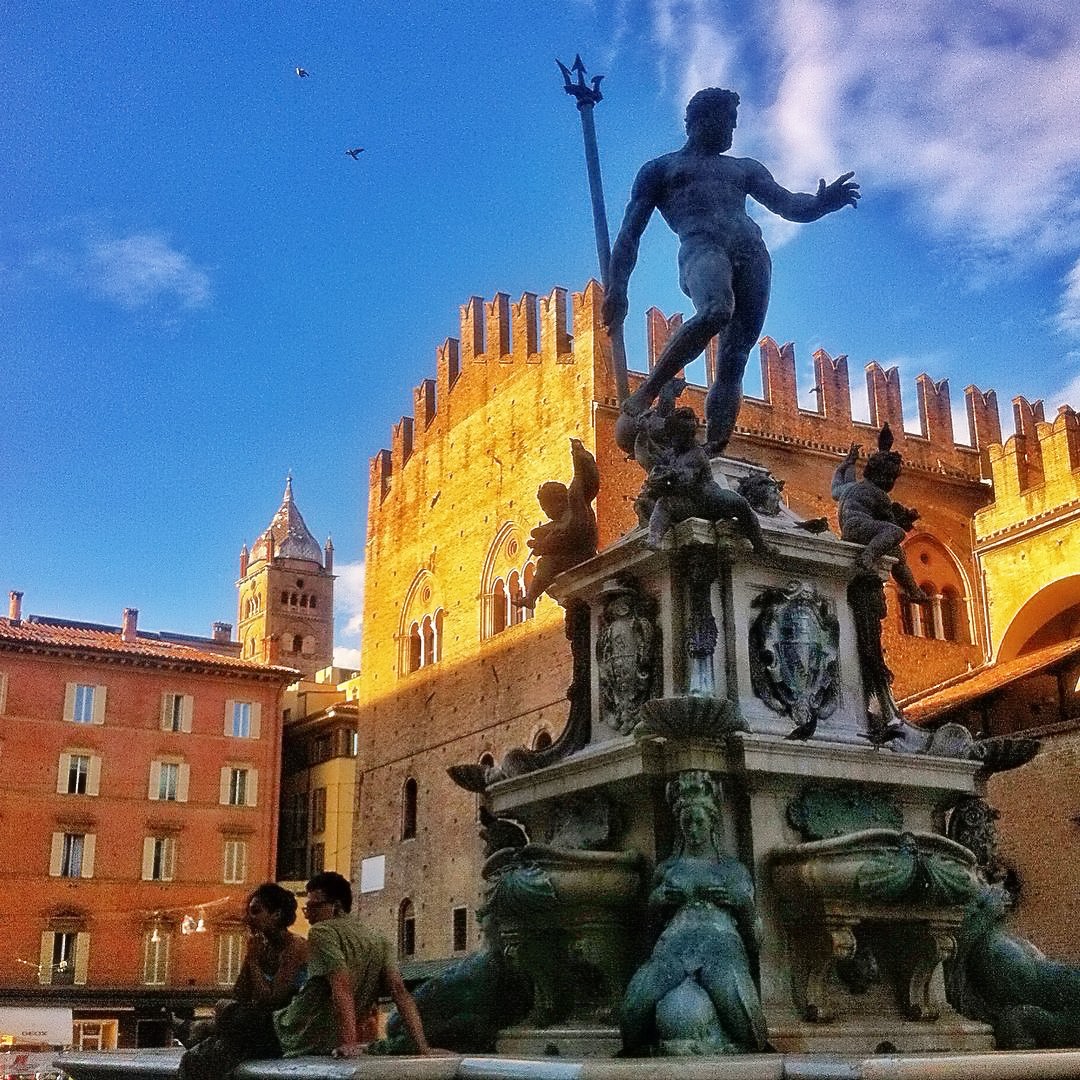 Buongiorno Neptuno! The main statue in the main square of Bologna, the largest city and the capital of the Emilia-Romagna Region in Italy. 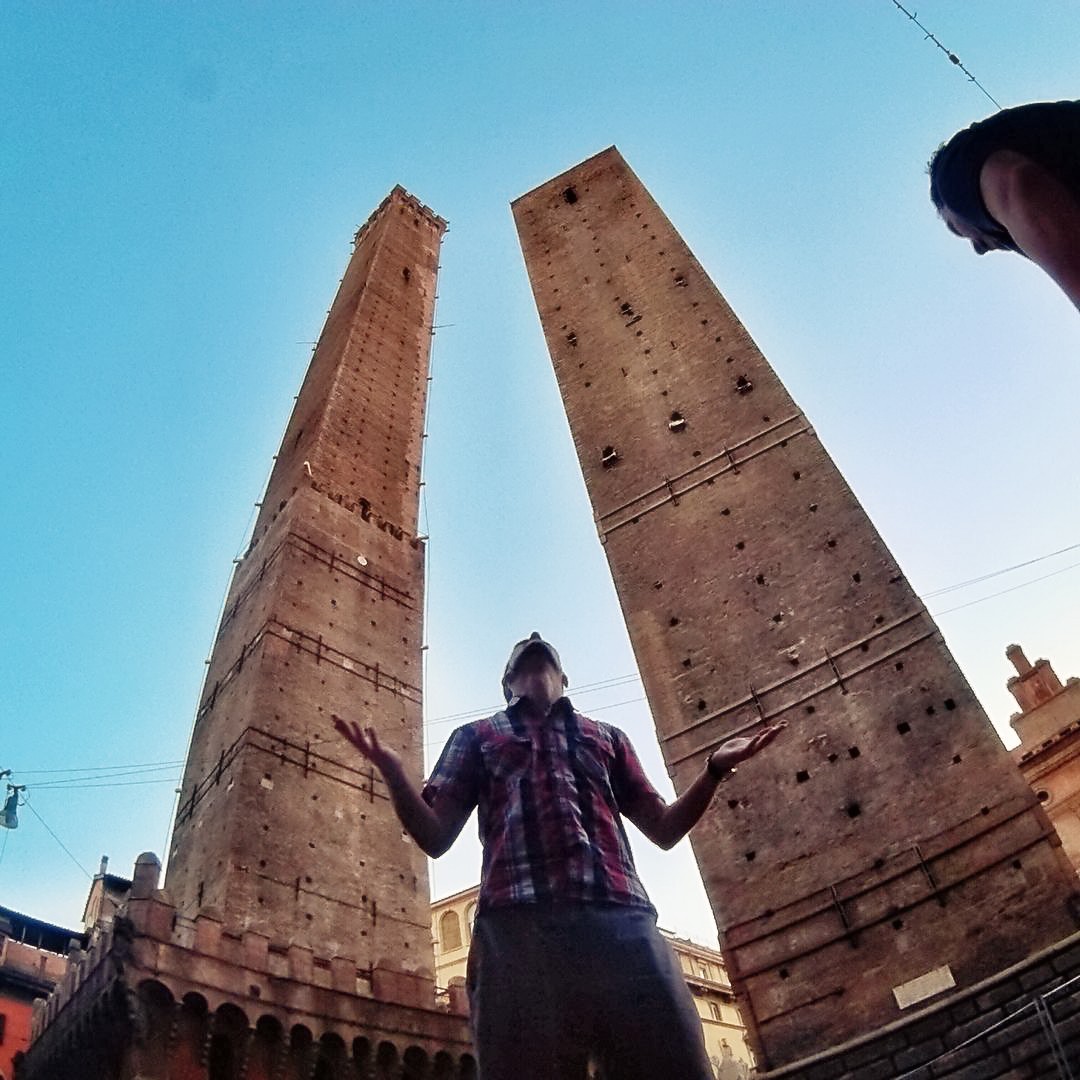 Between the 12th and the 13th century, the number of towers in the city were approximately 180, constructed by the noble/richest families to show its dominion and with offensive/defensive purposes. Nowadays, are around 20 towers and the most famous are «The Two Towers», the Asinelli Tower with 97 meters and the Garisenda Tower with 48 meters. 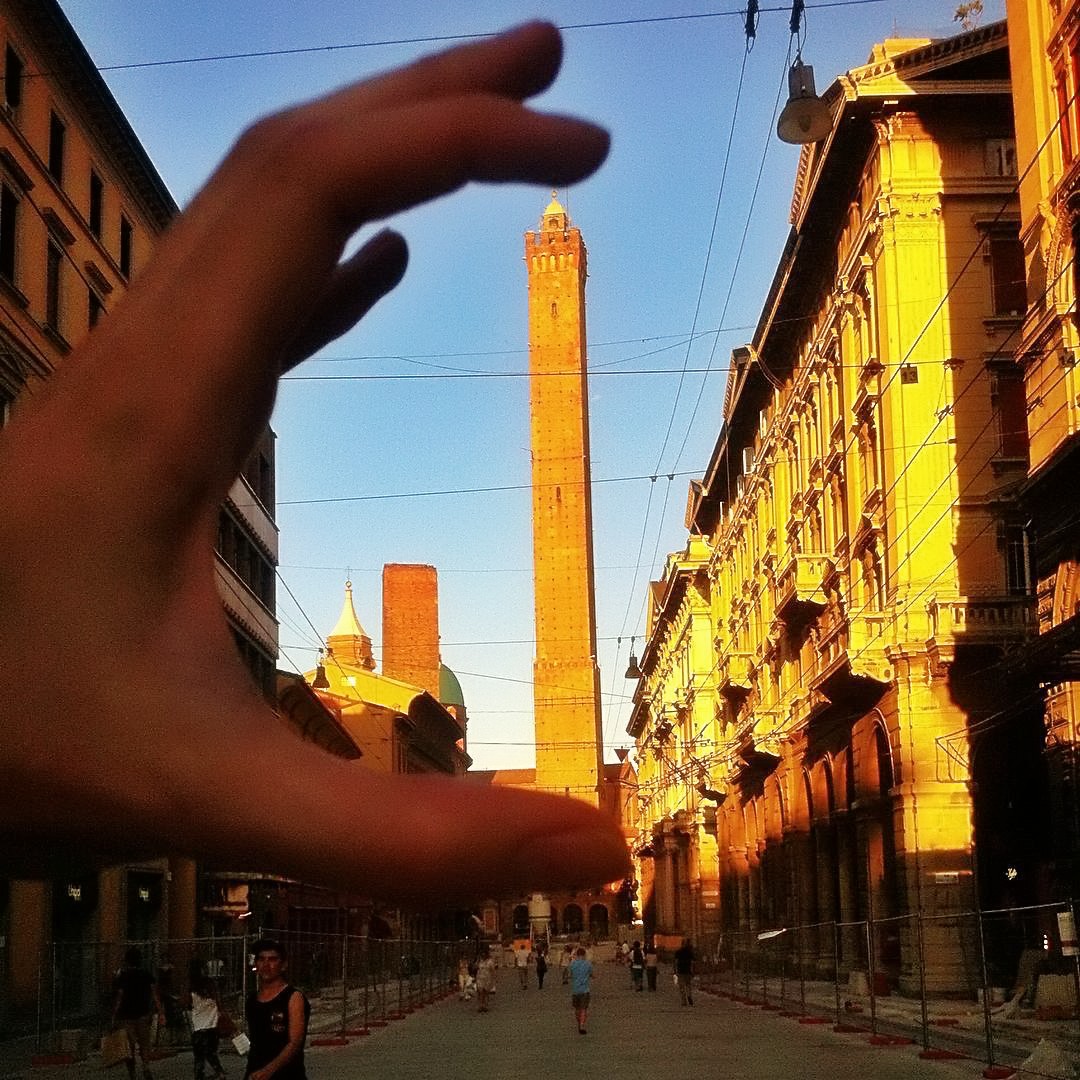 The Asinelli Tower was built between 1109 and 1119 by the Asinelli family, and in the following century it was acquired by the Municipality of Bologna. It is 97.20 metres high with a drop of 2.23 metres and an inner staircase of 498 steps completed in 1684. Today, its portico hosts a few craft shops and ateliers,to recall the merchants’ trade of the Medieval ‘mercato di mezzo’ •👌• 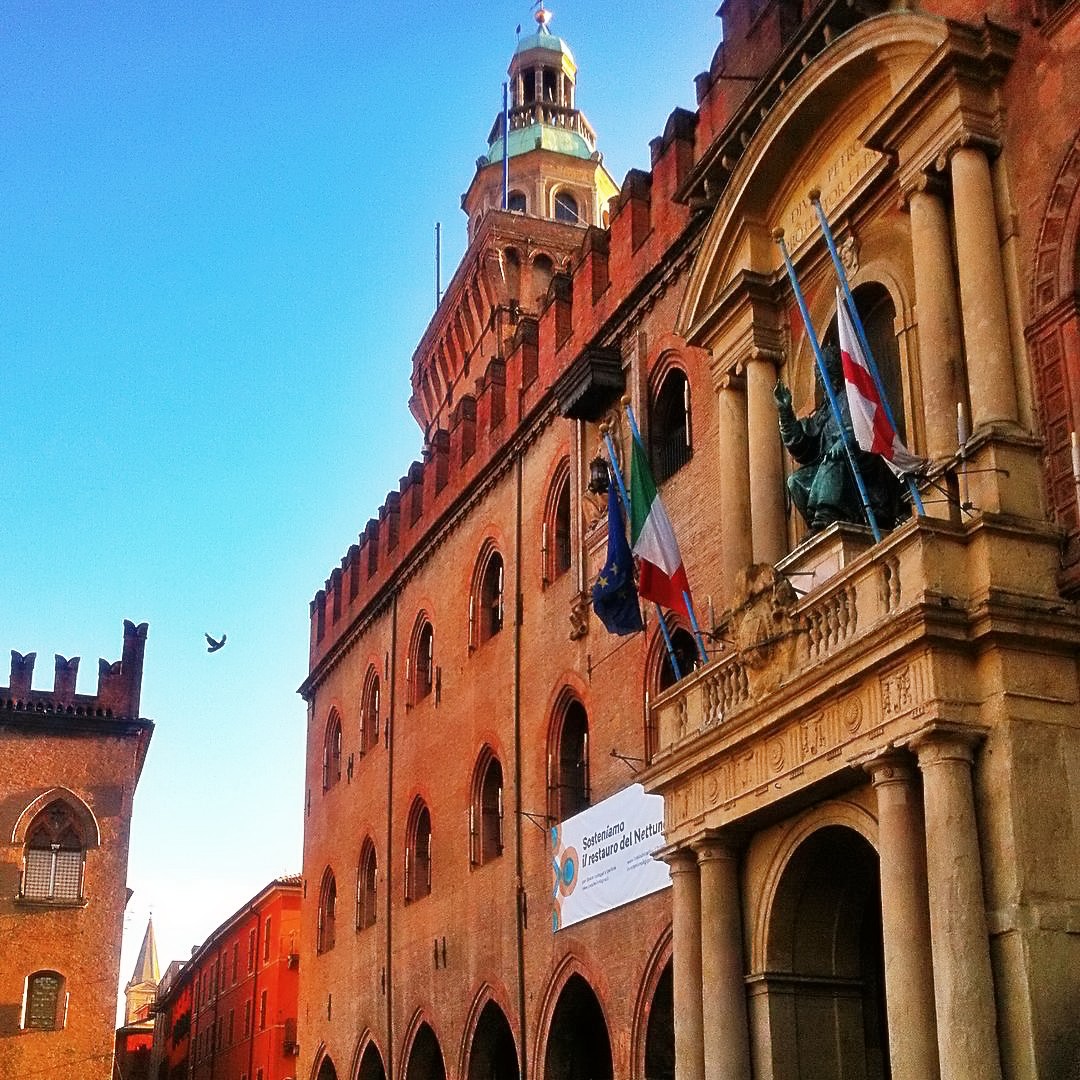 Nice corner, a sky and a bird from Bologna. 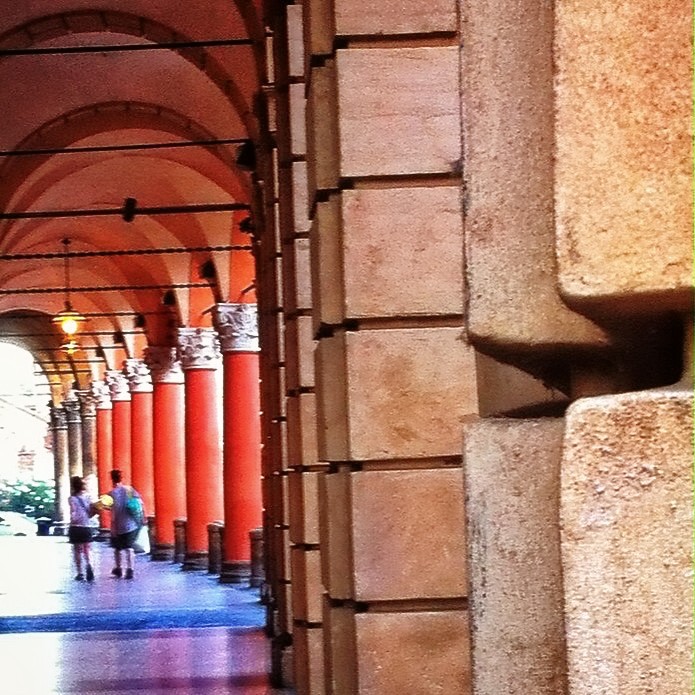 Bologna is the city with more porticoes in all world with around 40 kilometers in the historical centre. The longest portico in Bologna has 3,8 km with 666 vault arcades •♎️• 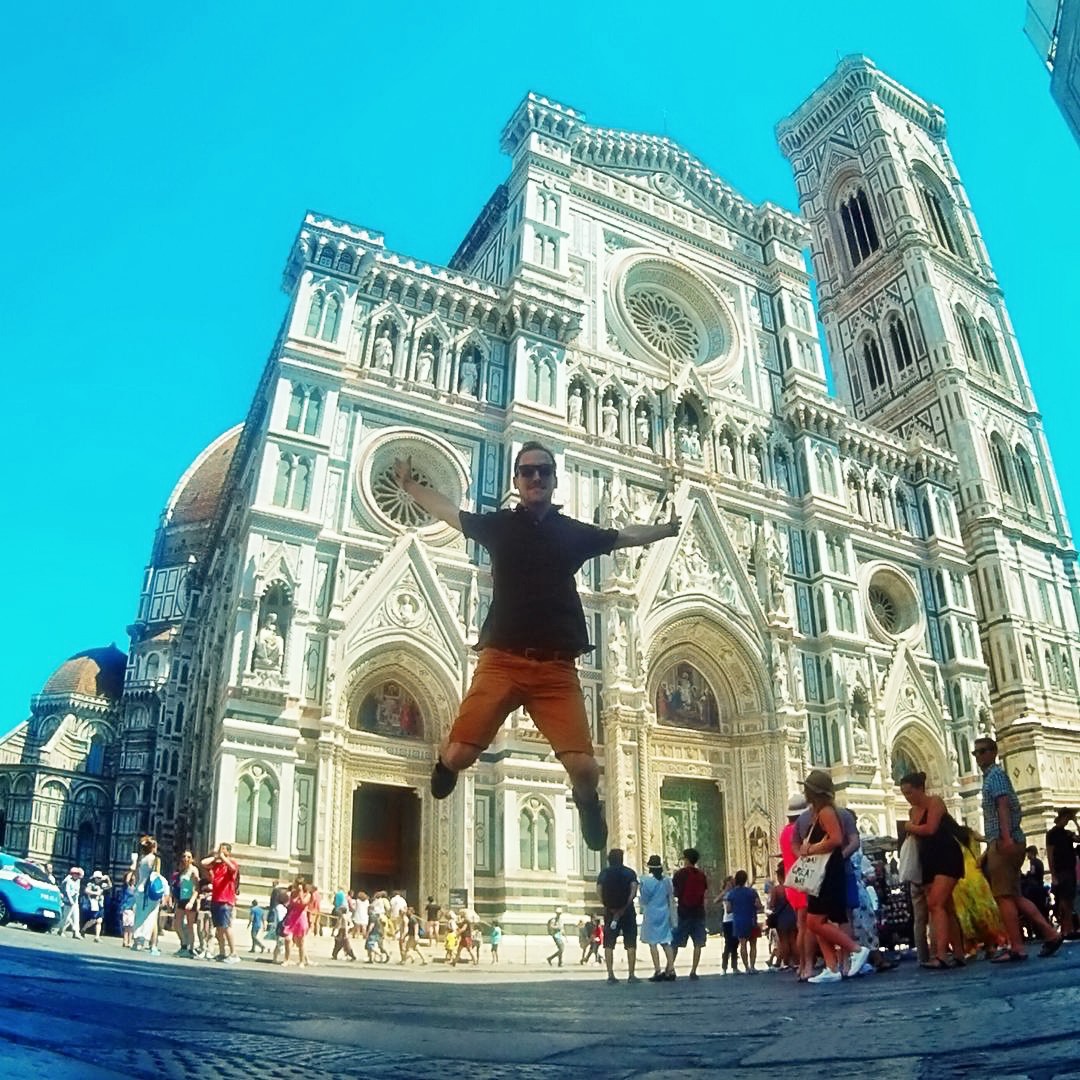 The Cattedrale di Santa Maria del Fiore is the main church of Florence. Il Duomo di Firenze, as it is ordinarily called, was begun in 1296 in the Gothic style to the design of Arnolfo di Cambio and completed structurally in 1436 with the spectacular dome engineered by Filippo Brunelleschi. 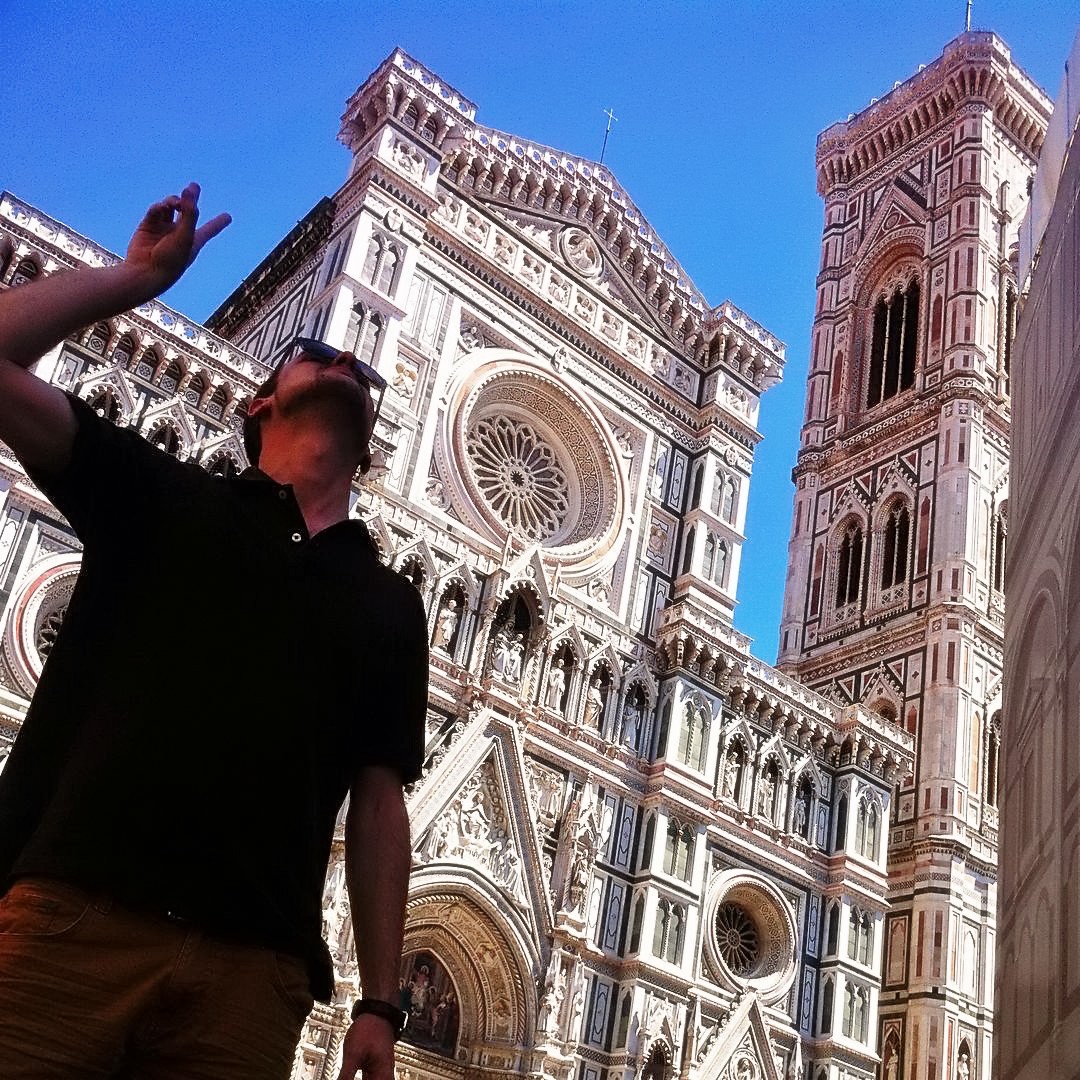 The exterior of the basilica is faced with polychrome marble panels in various shades of green and pink bordered by white and has an elaborate 19th-century Gothic Revival façade by Emilio De Fabris. The cathedral complex, located in Piazza del Duomo, includes the Baptistery and Giotto’s Campanile. The three buildings are part of the UNESCO World Heritage Site. The dome still remains as the largest brick dome ever constructed •✳️• 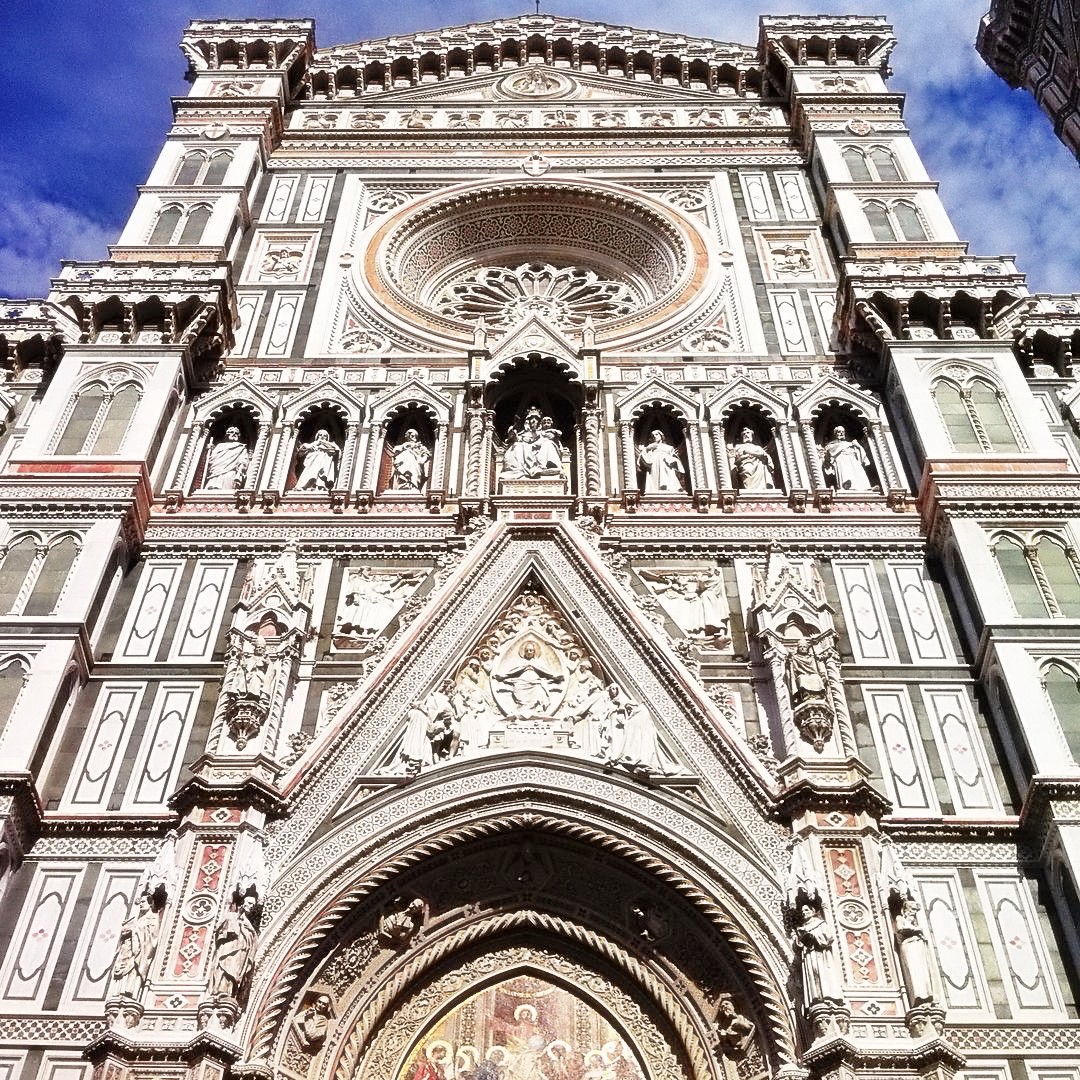 Face to face with this façade, nothing to say just silence to admire it •✨• 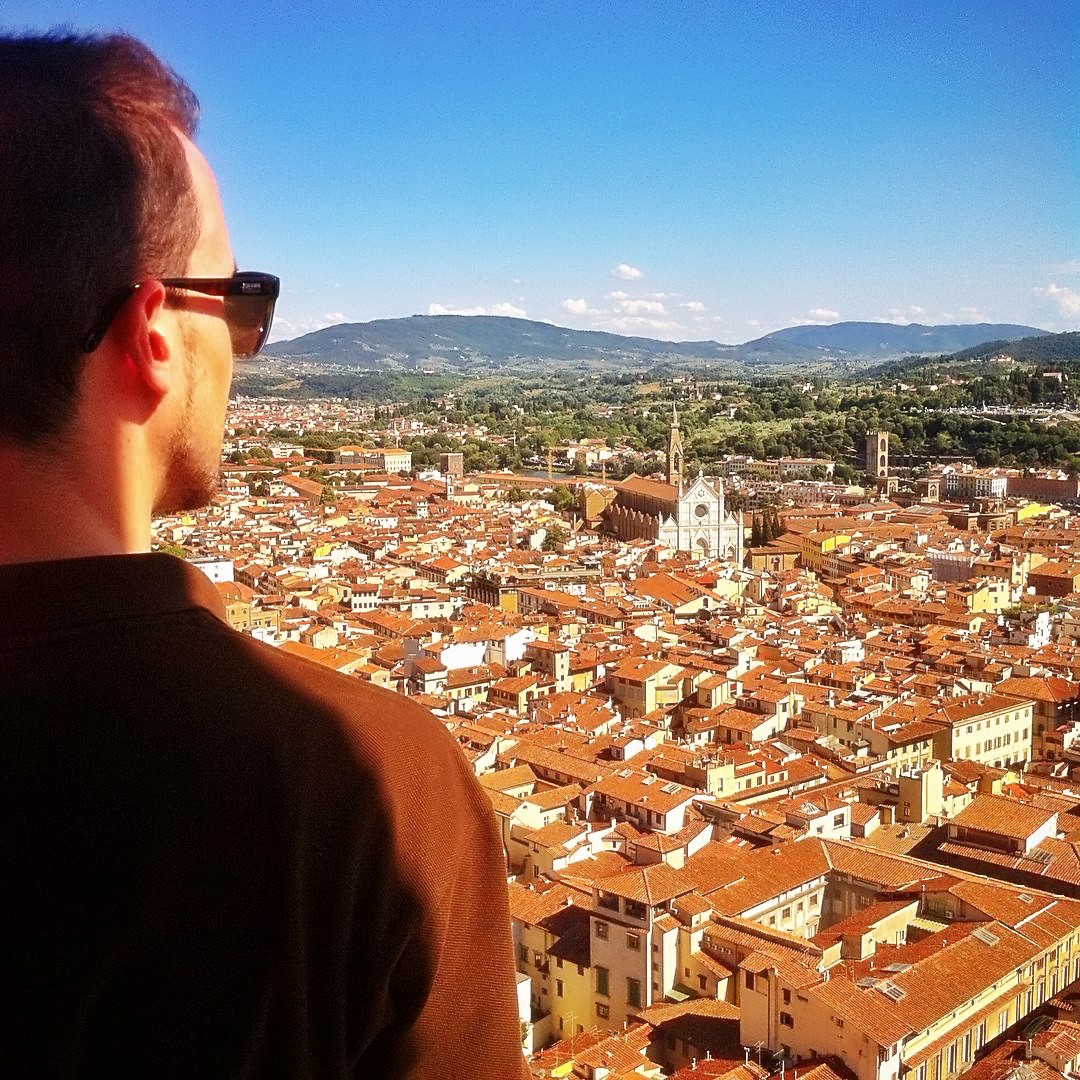 463 stairs after. This view. A real present for the eyes, at the top of dome Florence Cathedral. 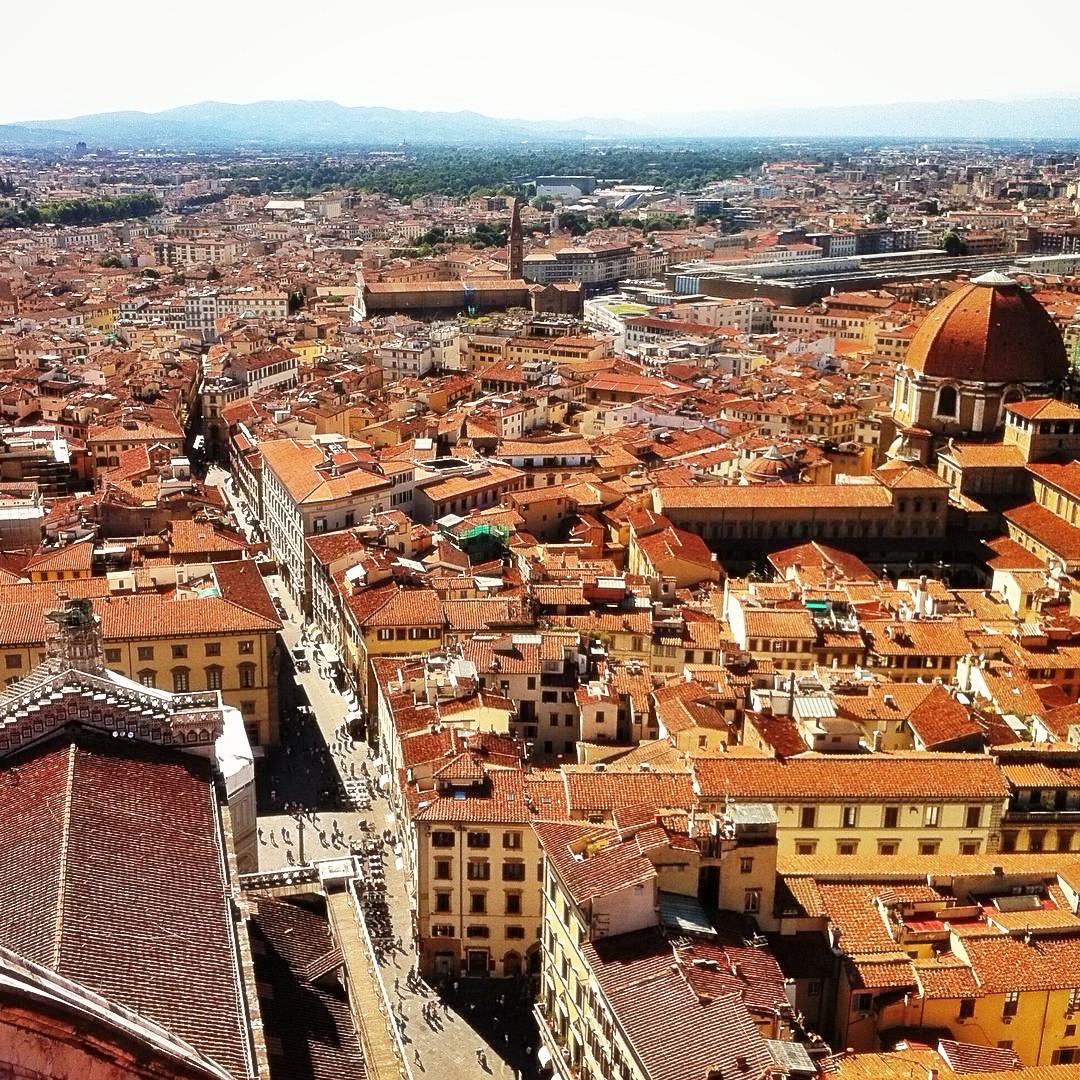 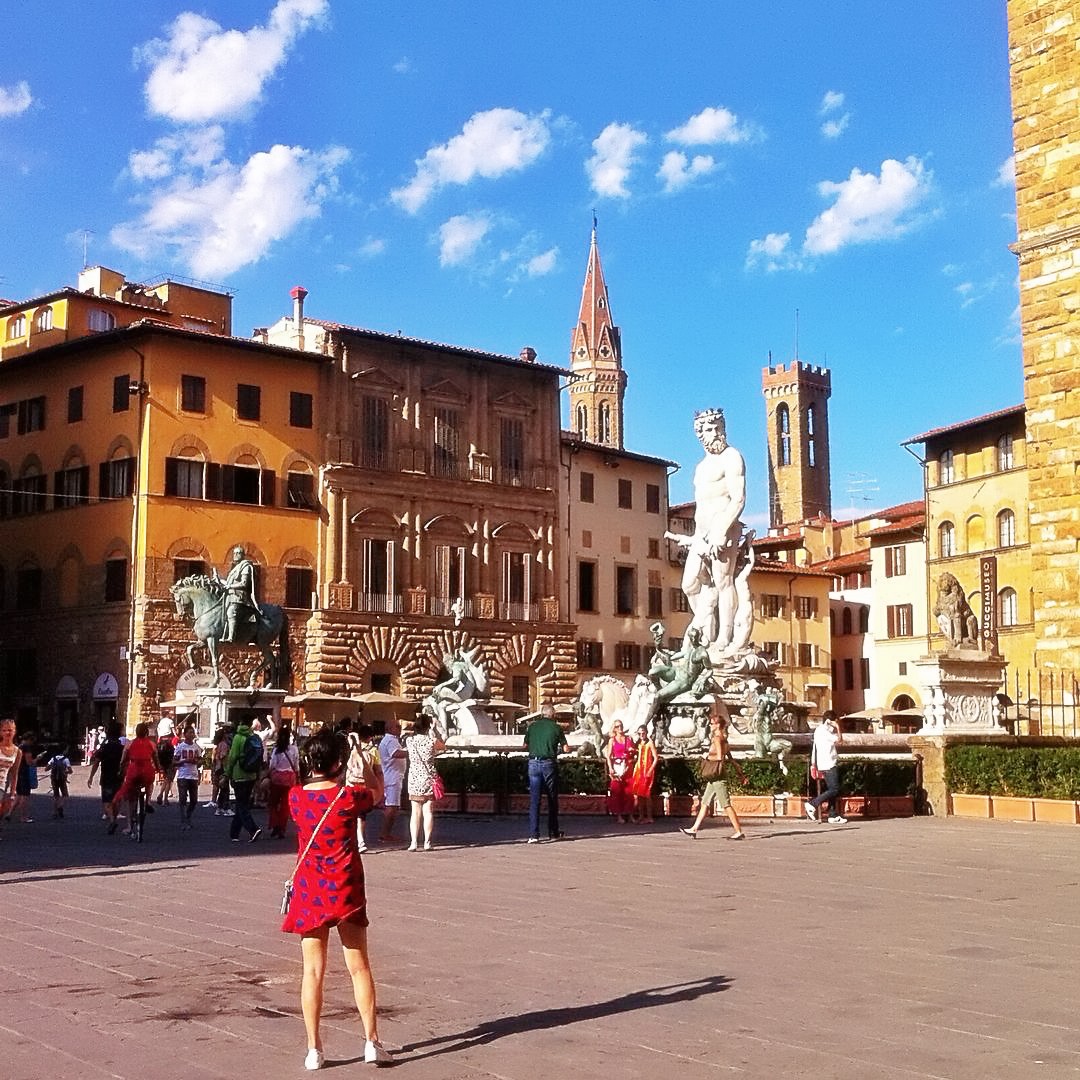 Replica Of Statue of David 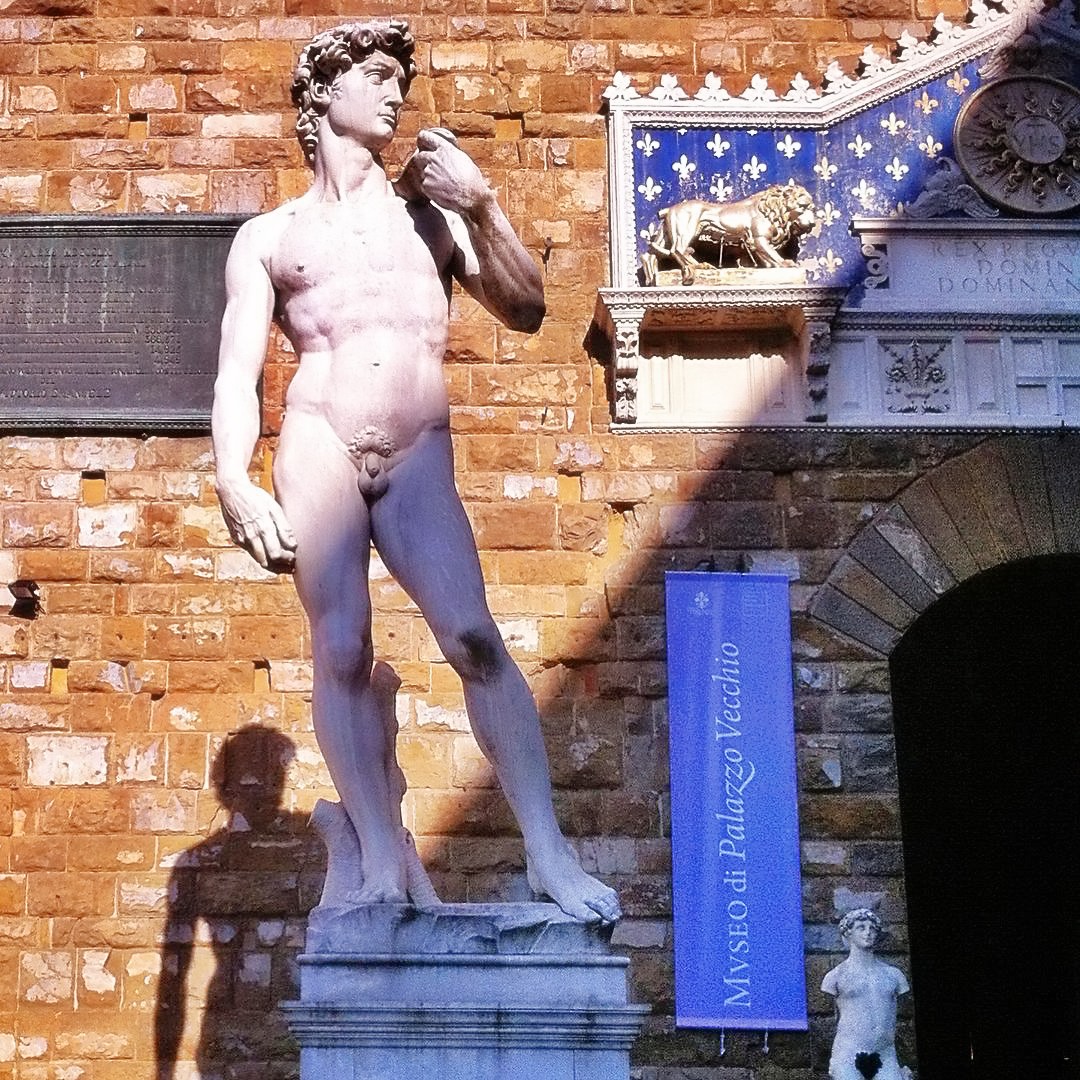 Sometimes the perfection doesn’t see, doesn’t hear, doesn’t speak and doesn’t feel • David is a masterpiece of Renaissance sculpture created between 1501 and 1504 by Michelangelo. It is a 4.34-metre and 5.17-metre with the base marble statue. The statue represents the Biblical hero David, a favoured subject in the art of Florence. David is depicted patiently waiting for battle, prepped with slingshot in one hand and stone in the other. This is the replica which is located in Piazza della Signoria •⭐️• 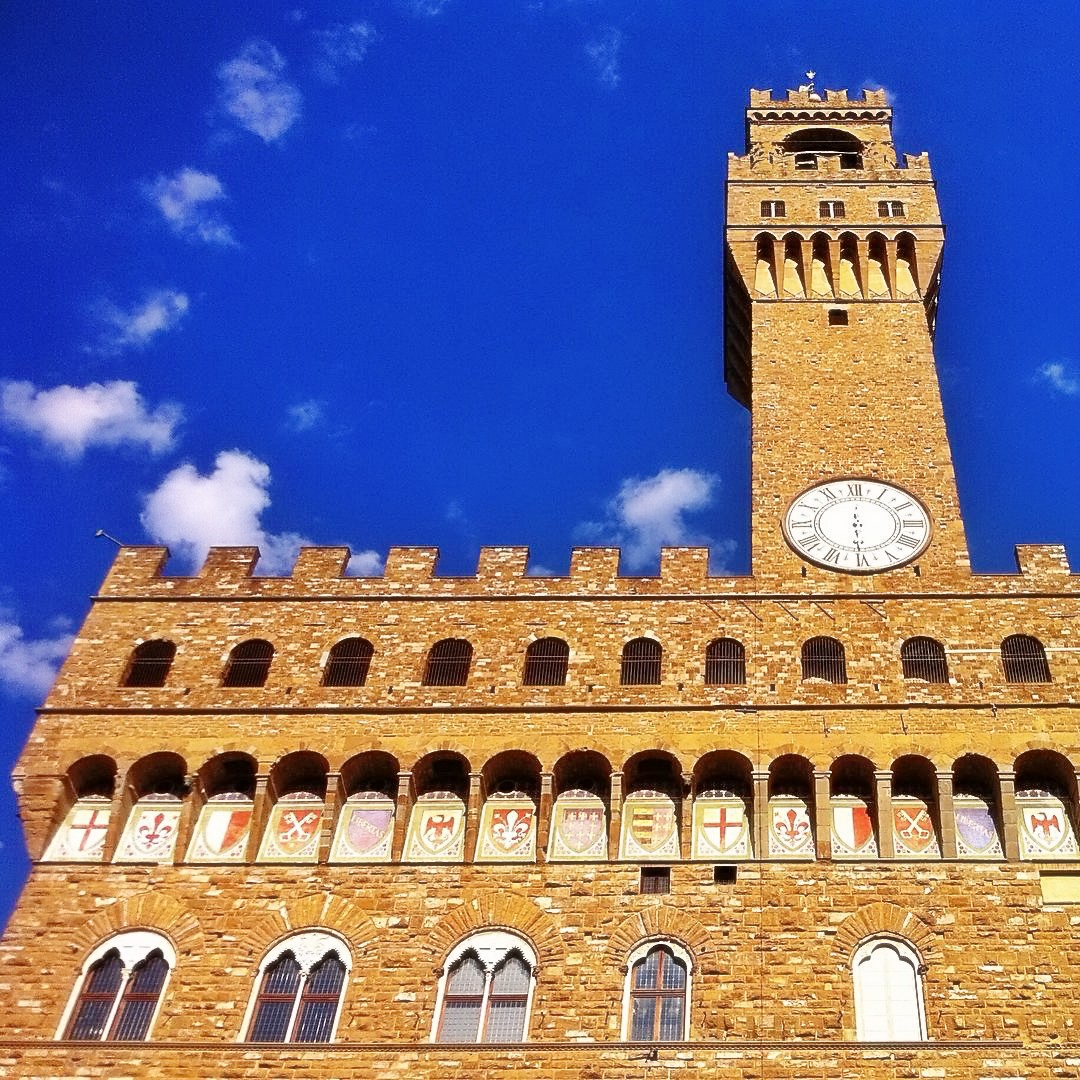 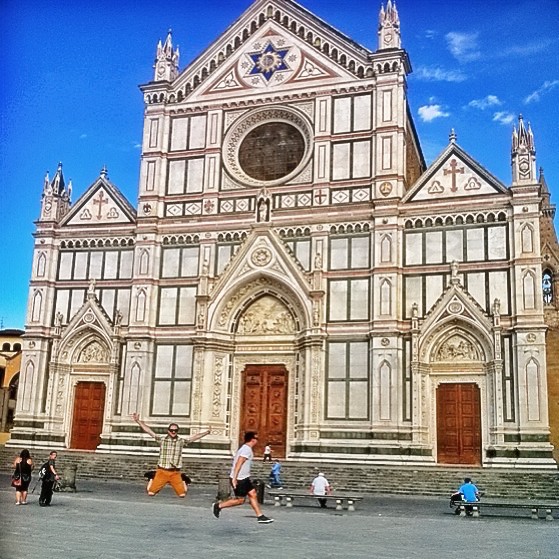 The Basilica di Santa Croce is the principal Franciscan church in Florence and largest in the world, as well as a minor basilica of the Roman Catholic Church. The present basilica, traditionally attributed to Arnolfo di Cambio, was built from 1295, on the site where, around 1210, the first Franciscan friars to arrive in Florence had a small oratory. Santa Croce is planned as an Egyptian cross, with an open timber roof; there are many tomb slabs set into the pavement. It is the burial place of some of the most illustrious Italians, such as Michelangelo, Galileo, Machiavelli, Foscolo, Gentile and Rossini, thus it is known also as the Temple of the Italian Glories •🔲• 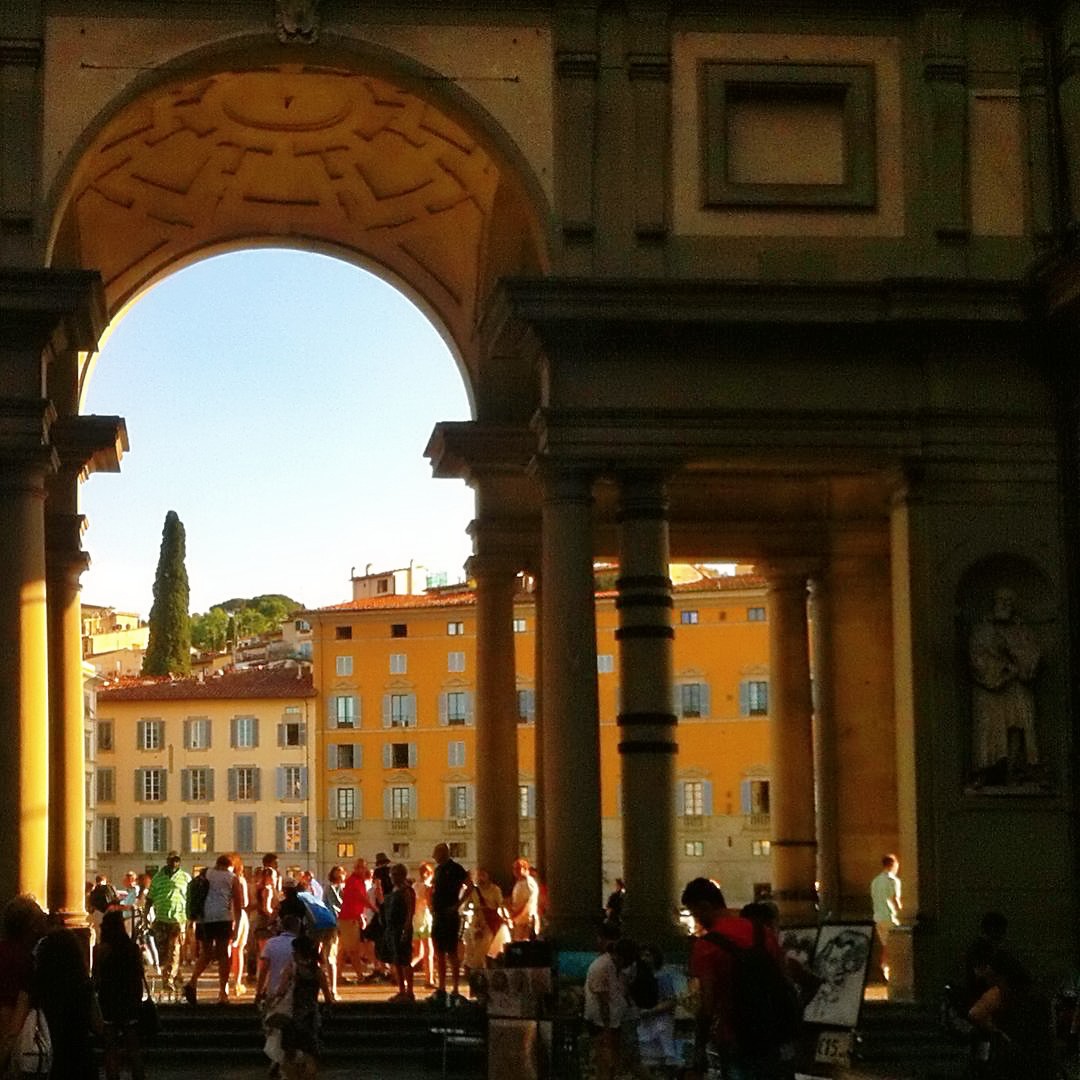 The “Galleria degli Uffizi” established in 1581 is one of the oldest and most famous museums in the world given the rich amount of unique artworks and masterpieces. The Uffizi Gallery hosts works of art by great Italian artists such as Botticelli, Giotto, Cimabue, Michelangelo, Leonardo da Vinci and Raffaello, mainly from the periods between the 12th and 17th centuries. It welcomes over a million visitors each year. The Uffizi, together with the Vatican Museums in Rome, are the top two most visited museums in Italy by visitors from all across the world •🎨• 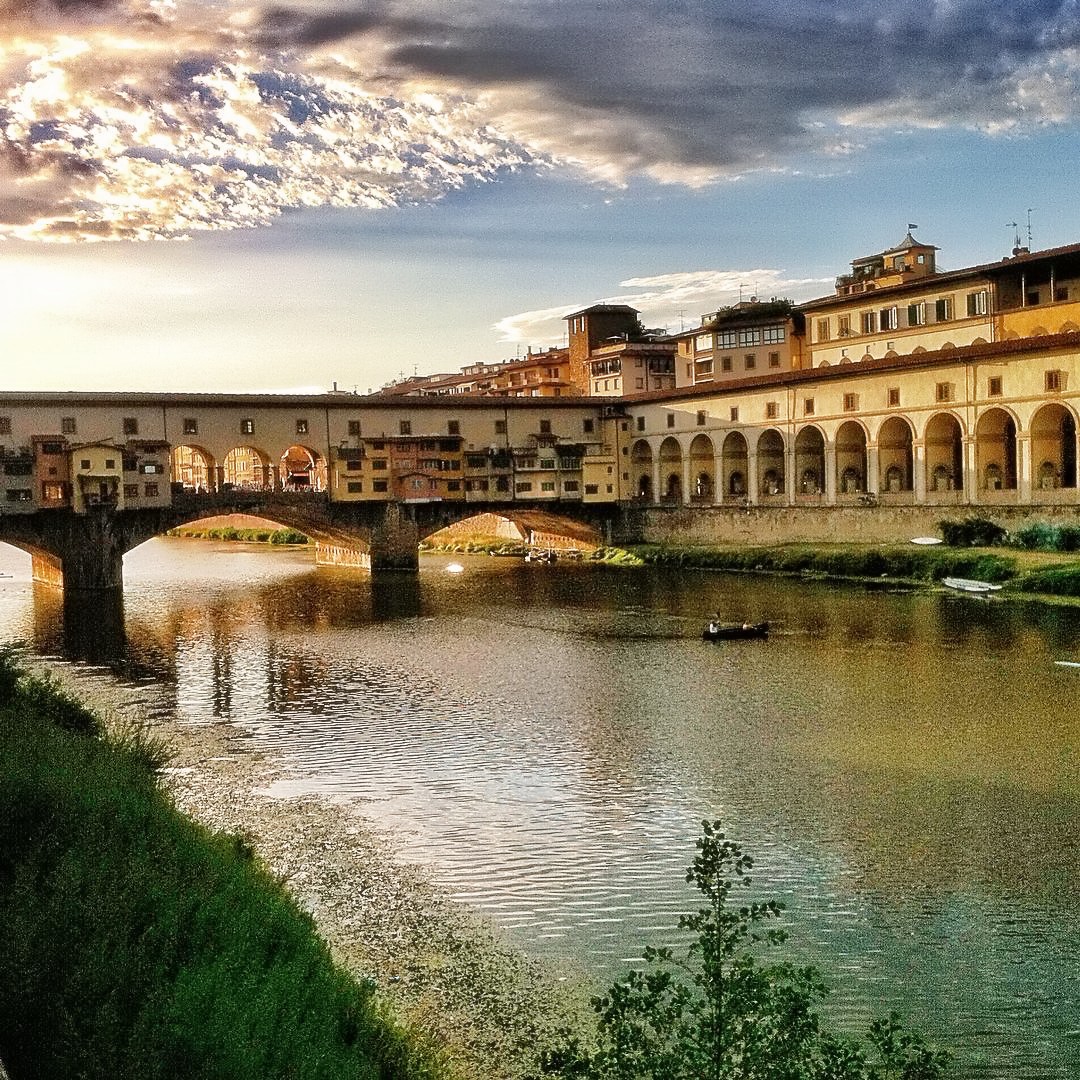 The Ponte Vecchio is the oldest bridge in Florence and the oldest stone bridge in Europe. It is built across the Arno River and it has shops along it. Butchers initially occupied the shops, the present tenants are jewelers, art dealers and souvenir sellers. During World War II the bridge was not destroyed by the Nazis, unlike all other bridges in Florence and many of them in Europe, due to an express order from Adolf Hitler, who had fallen in love with the beauty of this bridge •💛• 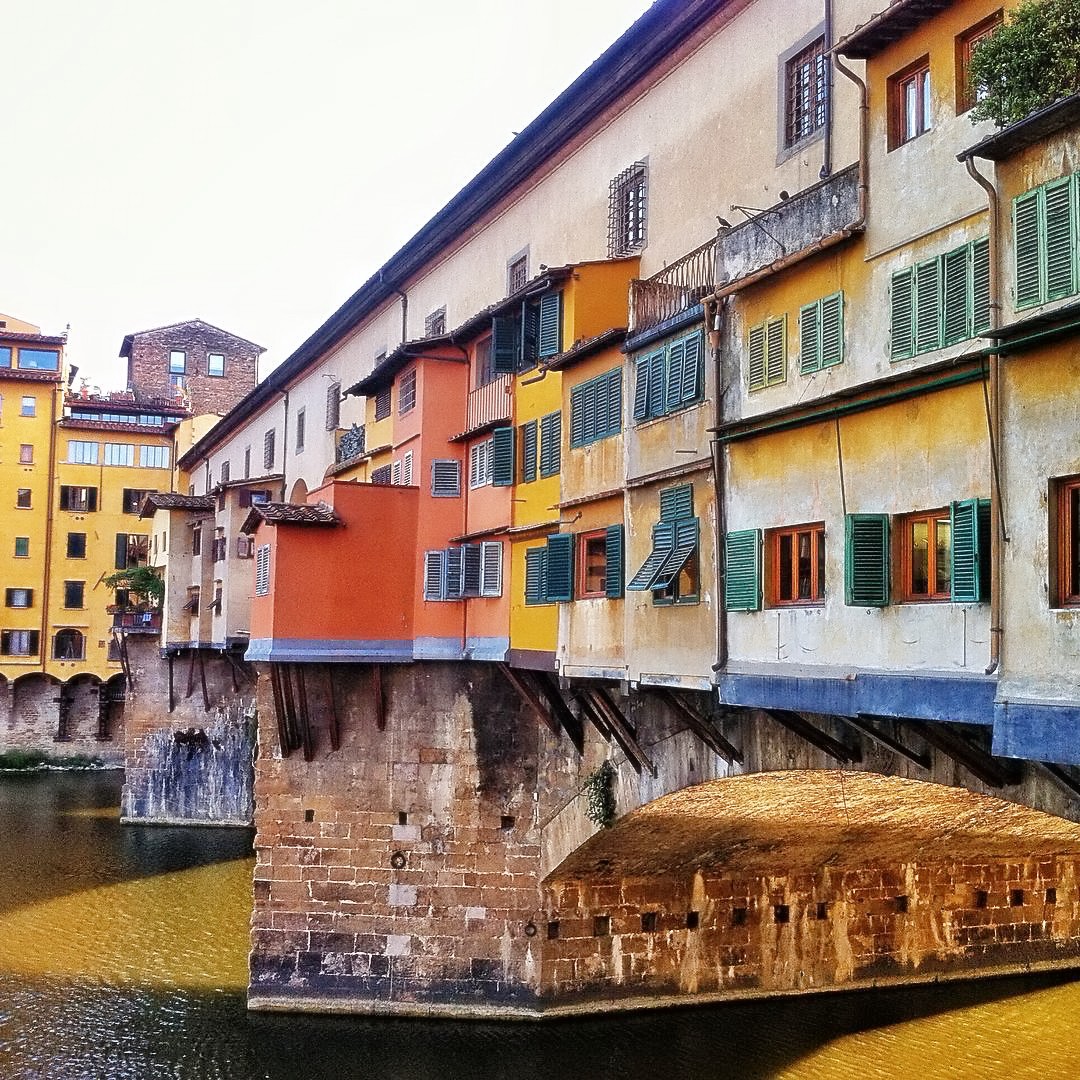 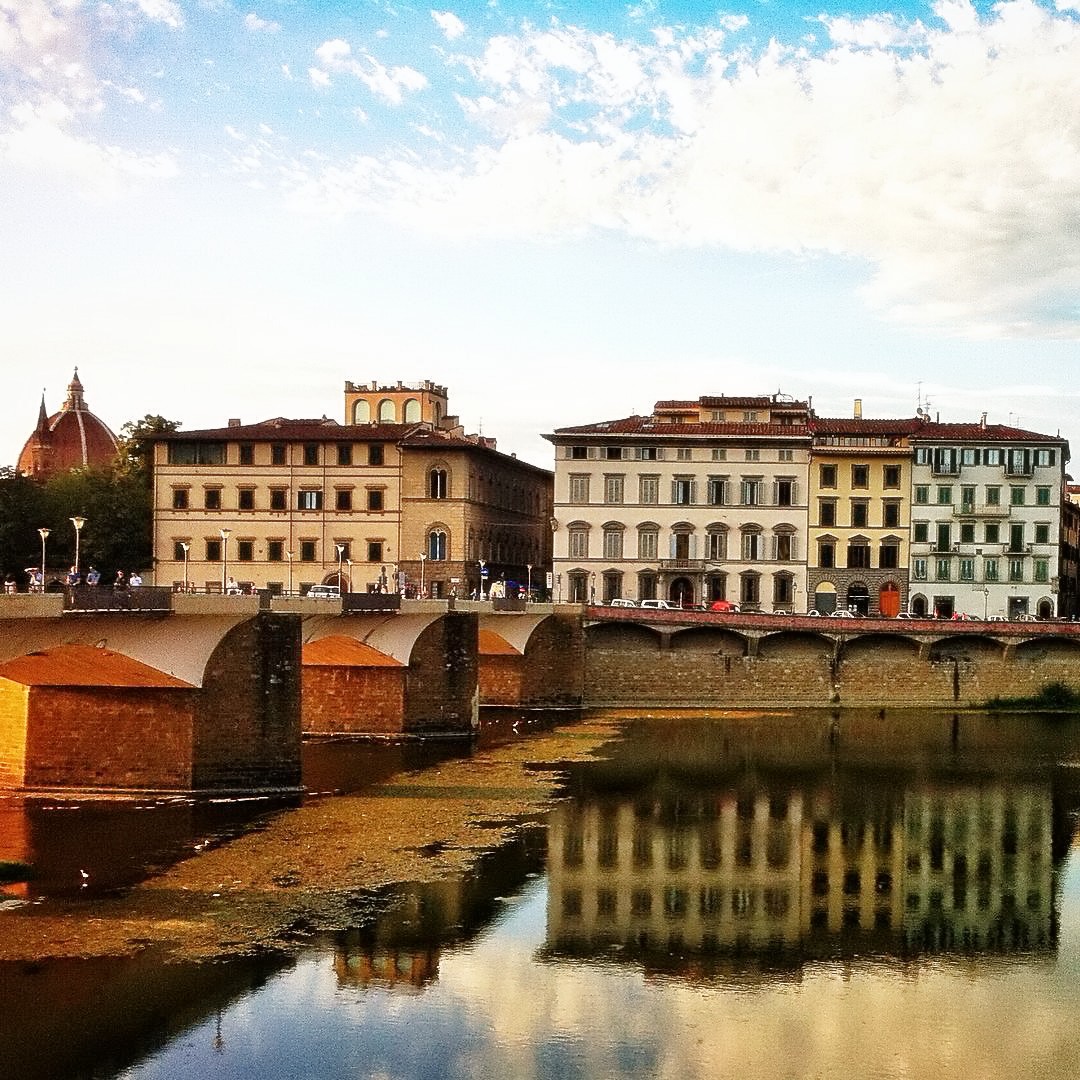 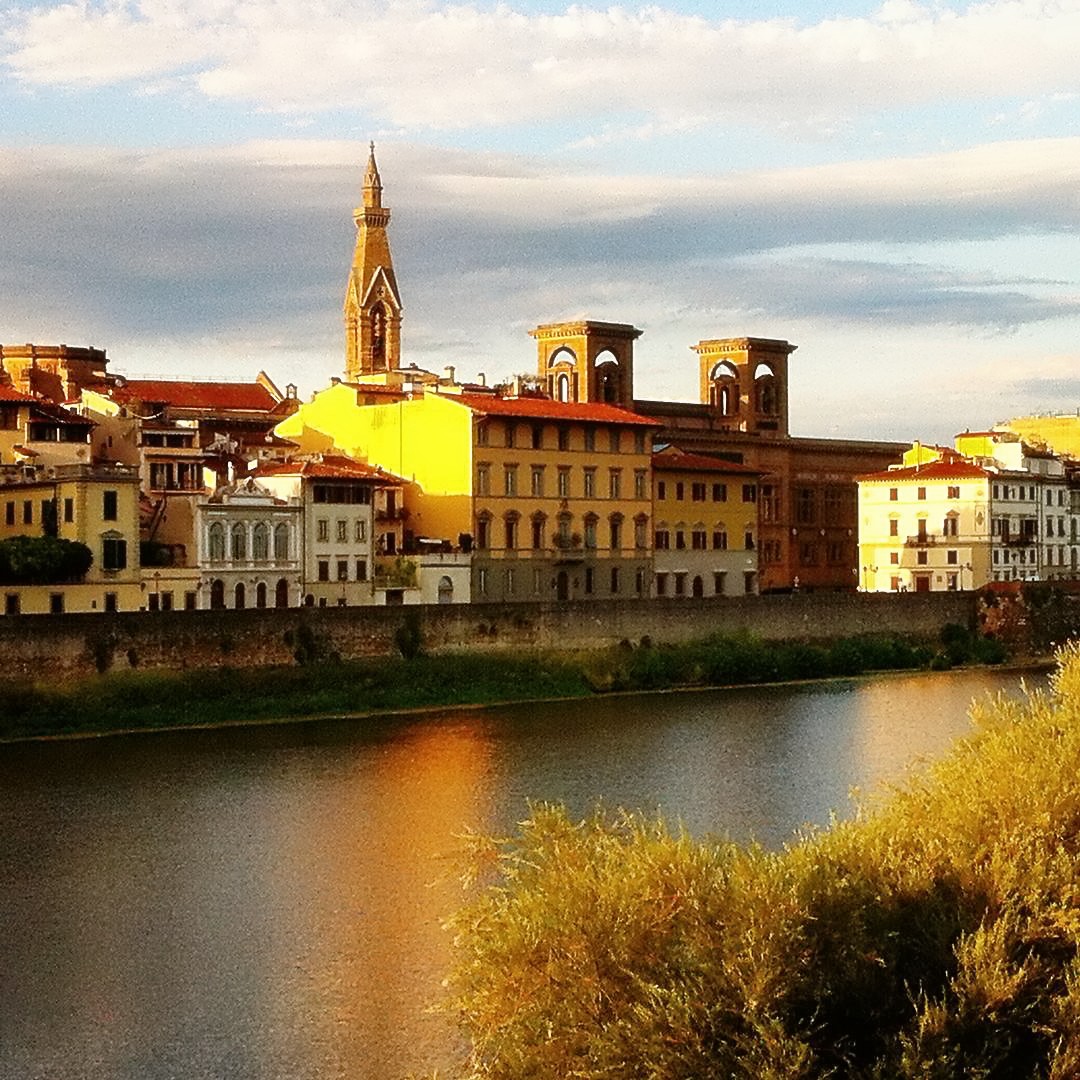 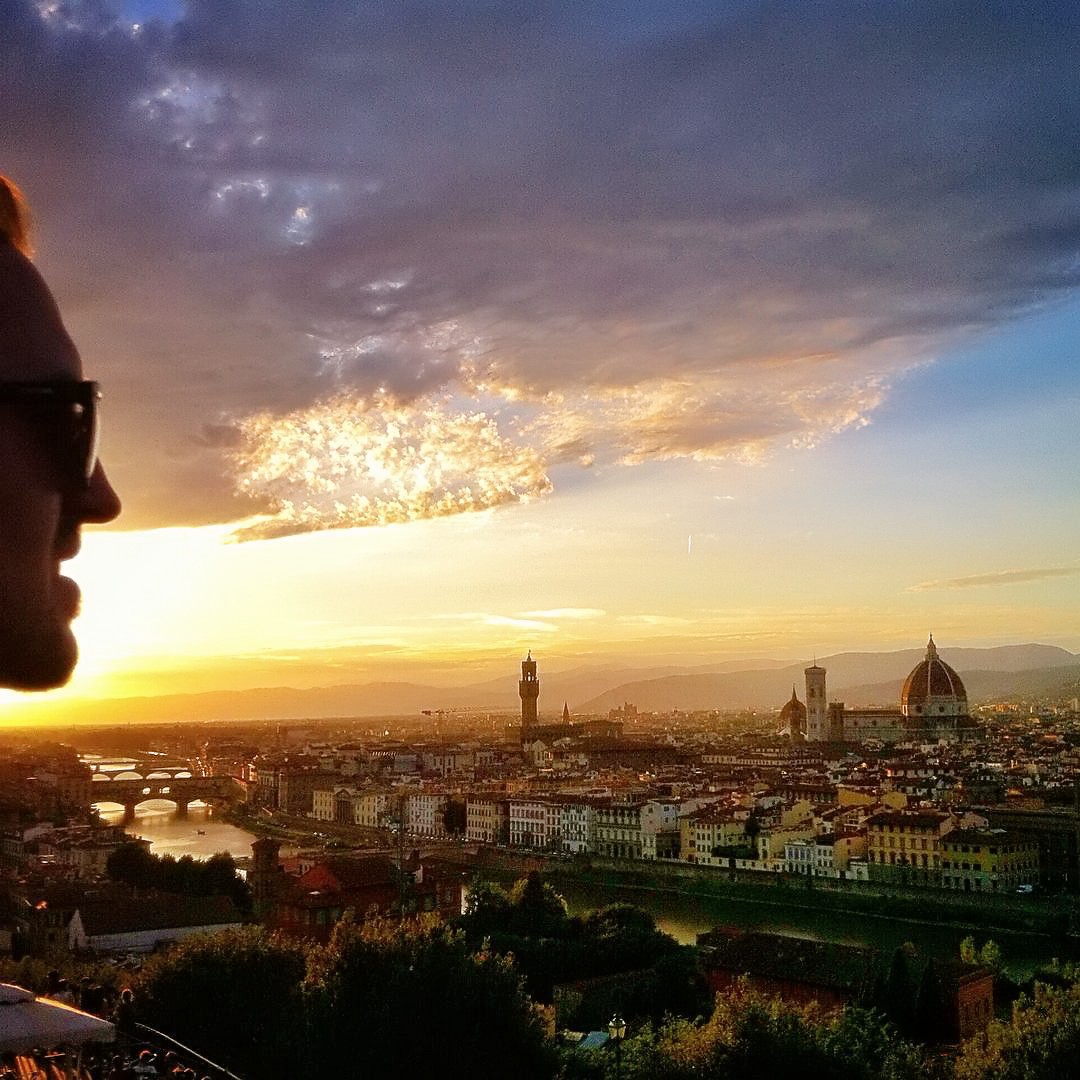 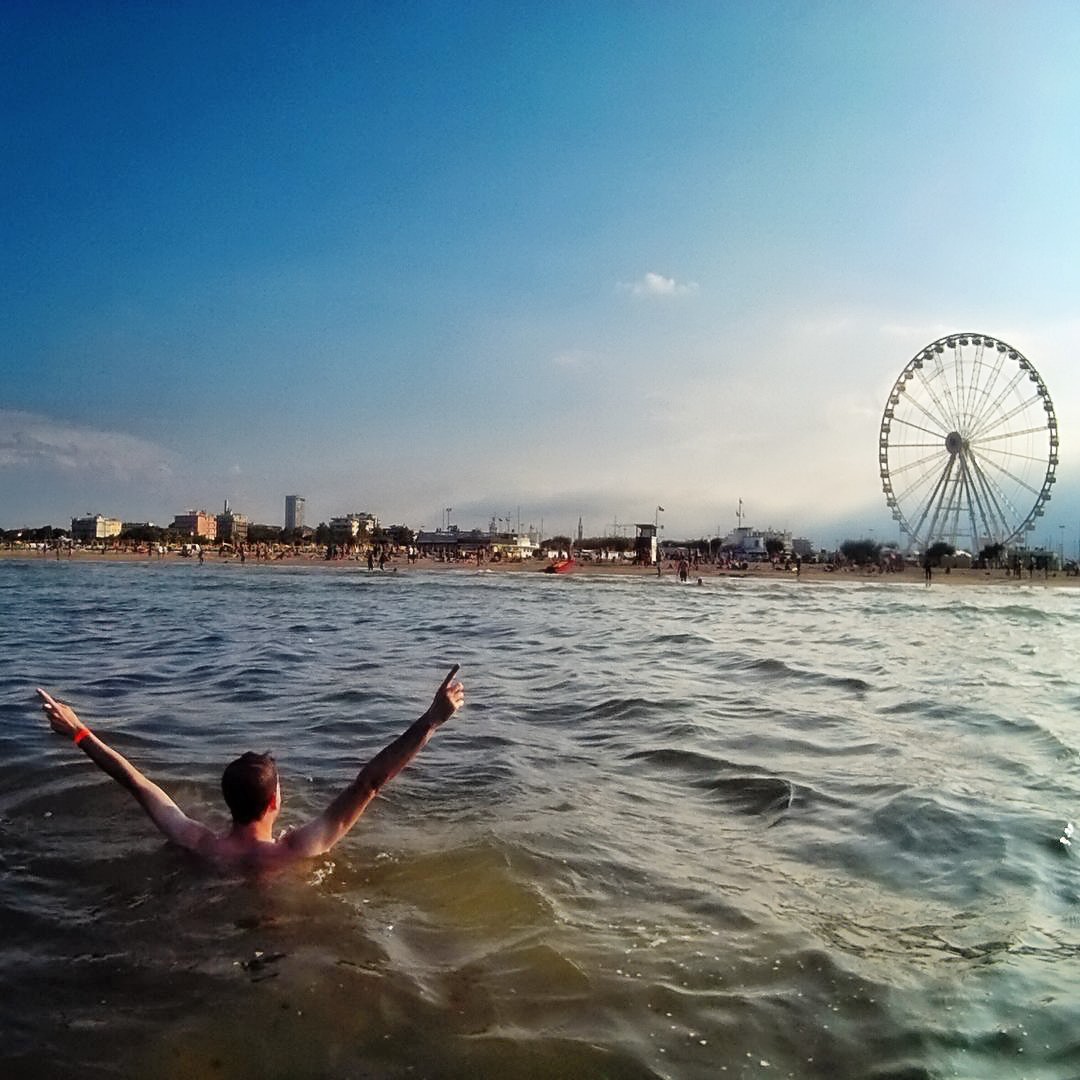 In Rimini you can find some party and great beach. The beach is 15 kilometers long and 200 meters wide •⚓️• 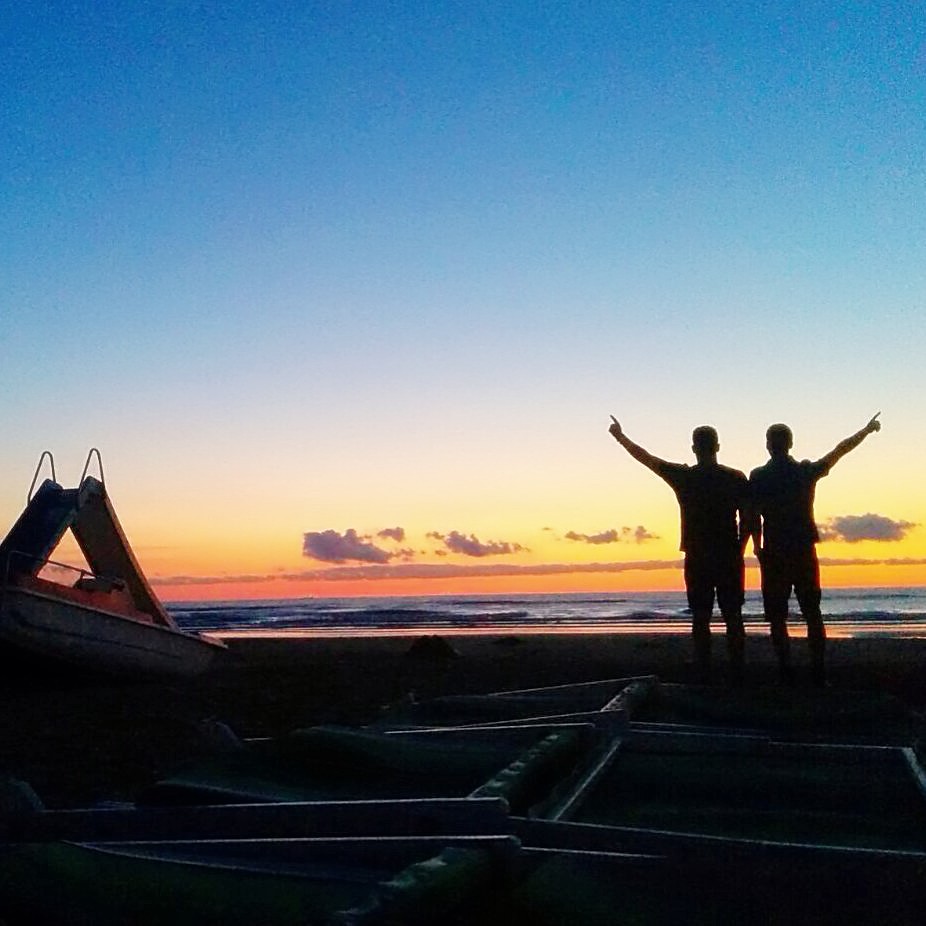 Sunrise after great party with my frá Whittaker! 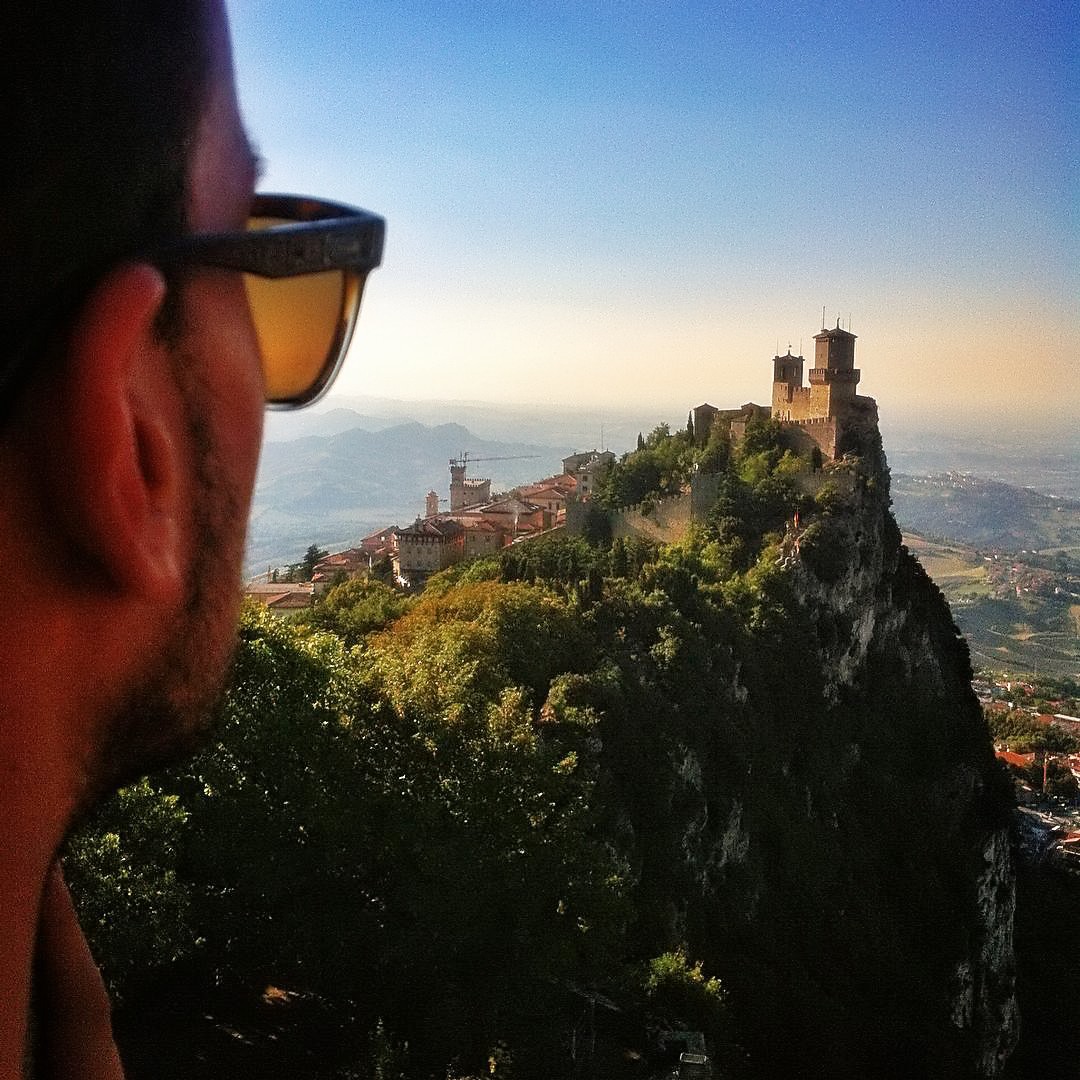 Welcome to this little country called San Marino. San Marino is the constitutional republic and the world’s oldest sovereign state. It is the only independent state that existed in Italy since the fall of the Roman Empire until the proclamation of the Kingdom of Italy in 1861, this award is thanks to grant refuge to Giuseppe Garibaildi during various strifes. On Mount Titano with 739 meters is located the old part of the city. The mountain has three peaks; in each of them there is a tower, the first called Rocca or Guaita, the second Cesta or Fratta and third Montale. It is completely surrounded by Italian territory country, is located 10 kilometers from the Adriatic Sea and is one of the European microstate •💙• 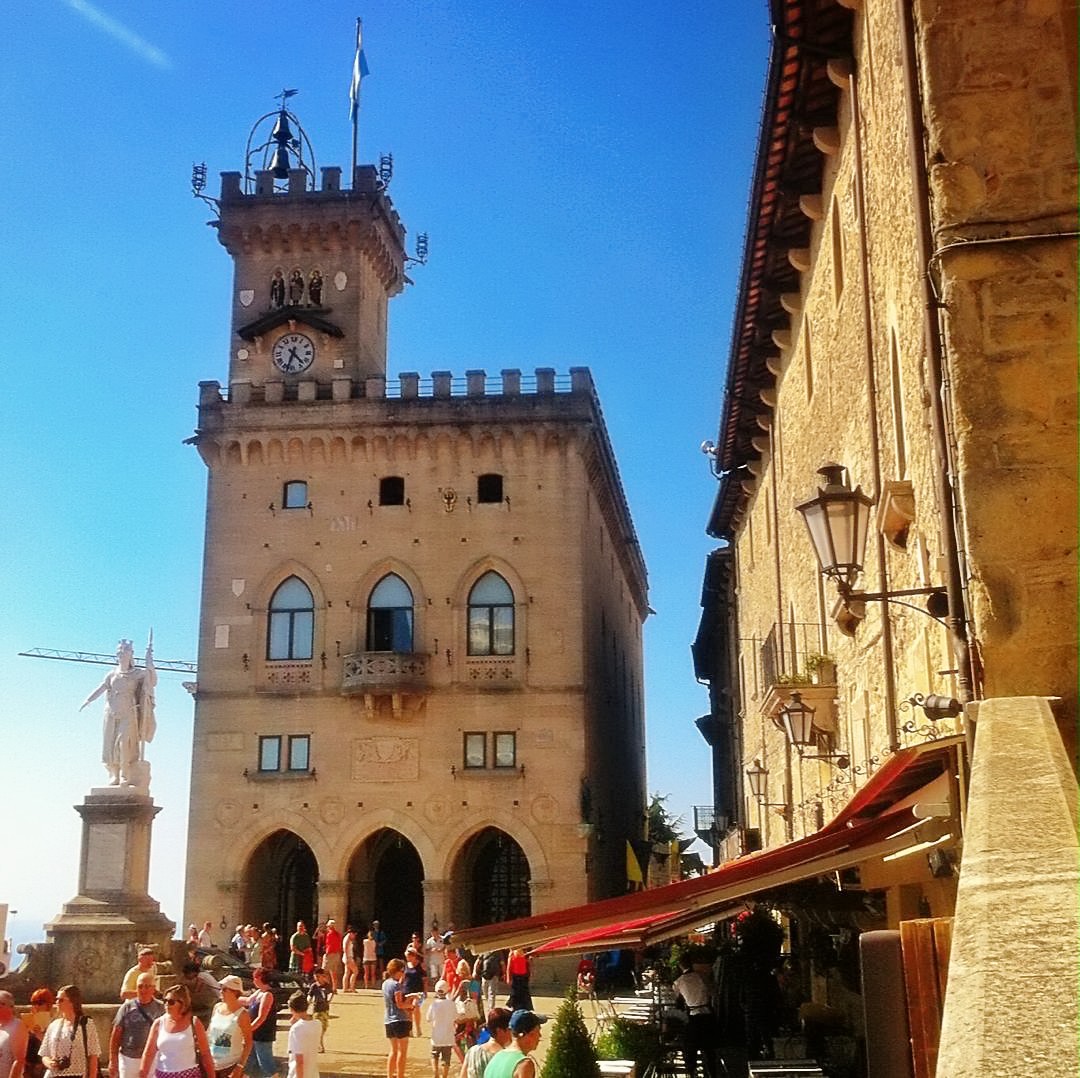 The Palazzo Pubblico is the town hall of the City of San Marino as well as its official Government Building. The building, where official State ceremonies take place, is the seat of the Republic’s main institutional and administrative bodies. It was built between 1884 and 1894 and later provided with a complex restoration in 1996. The main section of the building is topped by battlements over a series of corbels. The clock tower above also features such an arrangement with battlements and corbels. The overall design is similar to the Palazzo Vecchio in Florence, but on a much smaller scale •🔆• 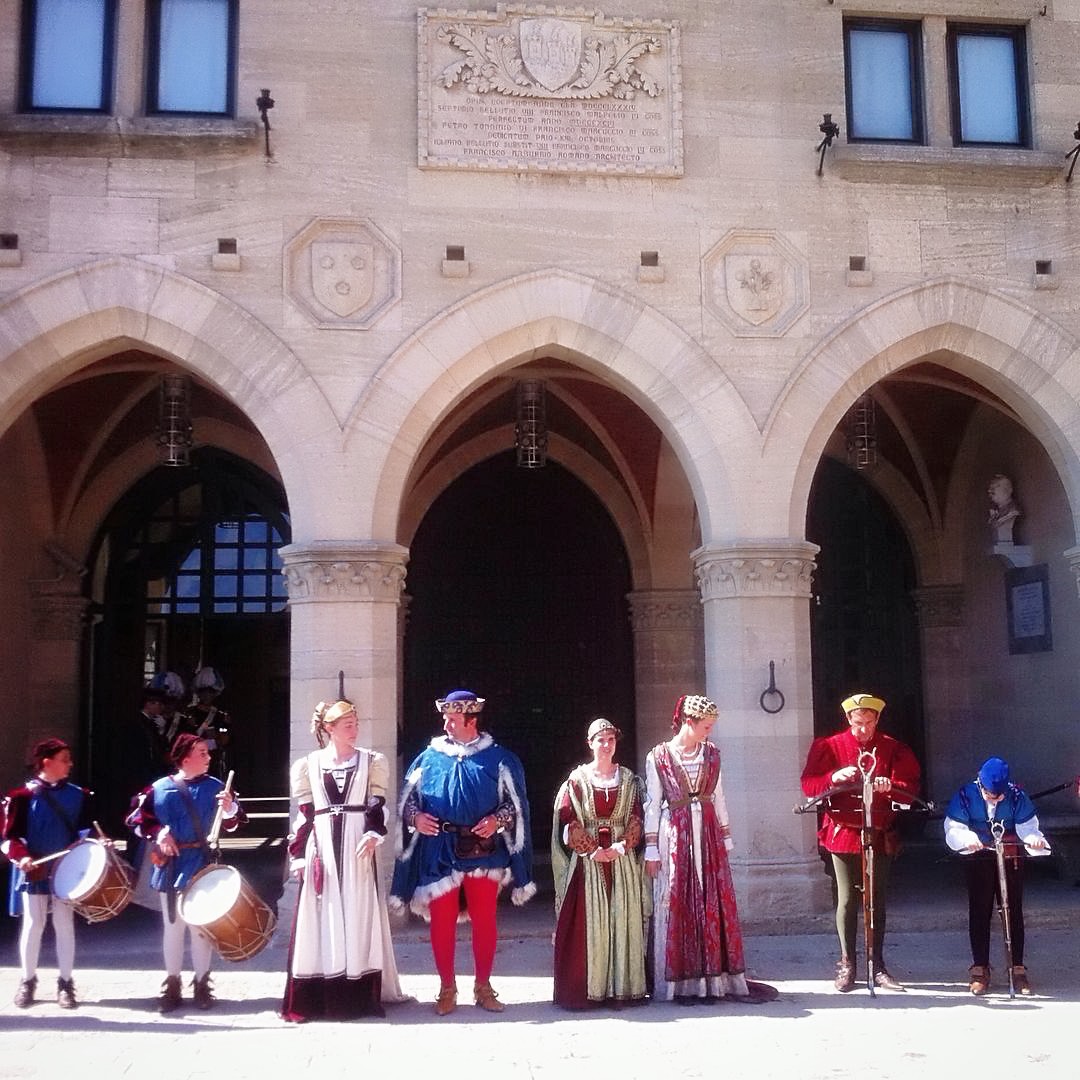 In San Marino, while walking by the old town in the Palazzo Pubblico you can find medieval feelings •🎭• 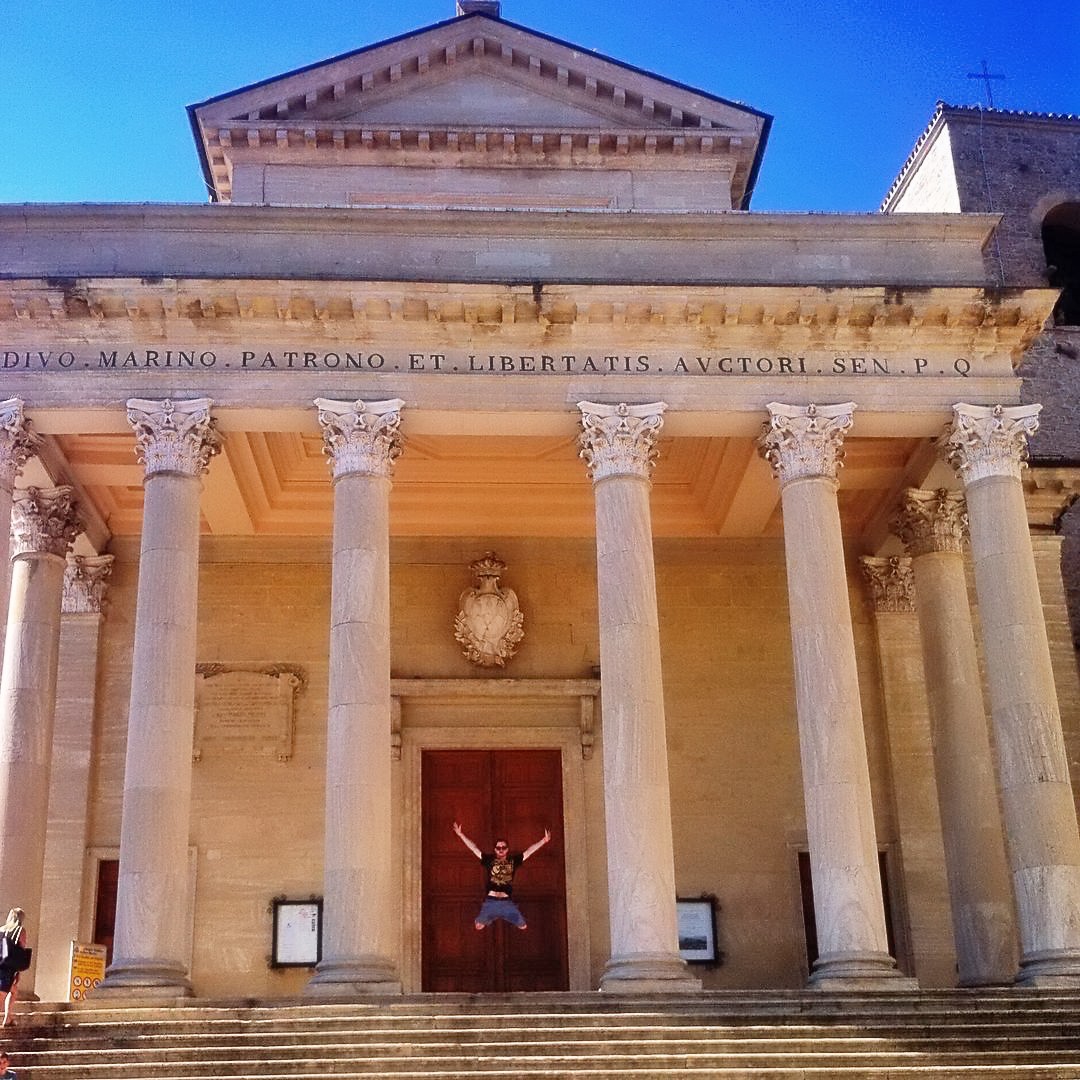 The Basilica di San Marino is a Catholic church and the main one of the city. The present church was built in 1836 in place of an earlier one that dated from 7th century. It is built in the Neoclassical style, with a porch of eight Corinthian columns. Relics of St. Marino are enshrined in the basilica. It is dedicated to Saint Marinus, the founder and patron of the Republic •🏤• 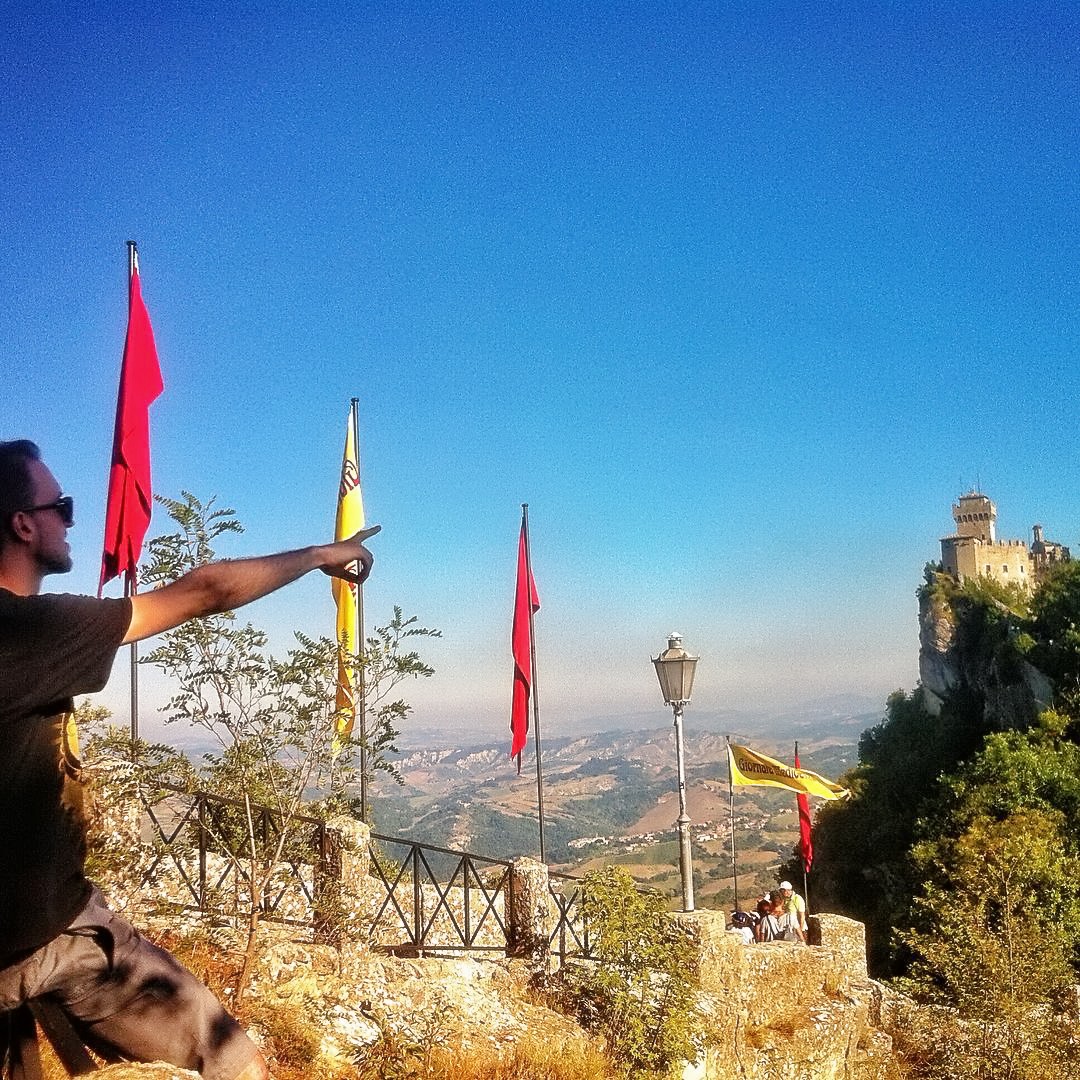 Mount Titano in San Marino has 3 peaks with a tower on each of them. From Cesta Tower, constructed in the 13th century on the remains of an older Roman fort, view to Montale Tower from 14th century, and then view to Guaita Tower which is the oldest one from 11th century and it was briefly served as a prison, located next to San Marino old city •🔱•