BEST TOURS AND ACTIVITIES IN BILBAO

These are the activities that I mostly recommend you in Bilbao with Civitatis.

Get to know the avant-garde work of the Guggenheim Museum in Bilbao with this tour that will allow you to delve into its fascinating artistic universe.

Guided tour of Bilbao and the Cathedral of Santiago

Discover the historic center of Bilbao with this guided tour that also includes a guided tour of the interior of the Cathedral of Santiago.

Visit the Old Town of Bilbao with this tour that also includes the ascent to the viewpoint of Mount Artxanda in the famous funicular. The best views of the capital! 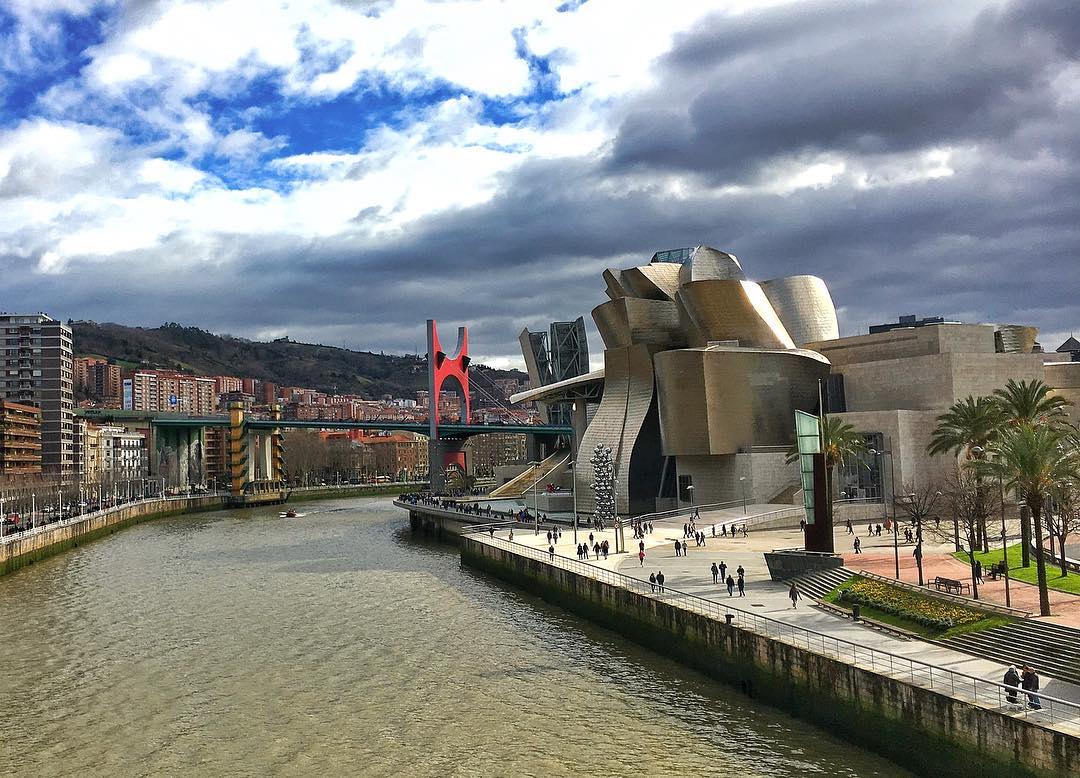 Bilbao is part of the select group of cities hosting a Guggenheim Museum. The other four privileged cities are New York, Las Vegas, Berlin and Venice. The unique structure of the museum’s building, designed by Frank O. Gehry, makes a harmonic set which acts as background to the city. Titanium scales, glass curtains and stone curves designed with complex mathematic formulas give shape to this enormous architectural sculpture showing perspectives never seen before. The fine titanium panels covering the museum look like fish scales and reflect fanciful shapes on the waters of the Nervion estuary •⚙• 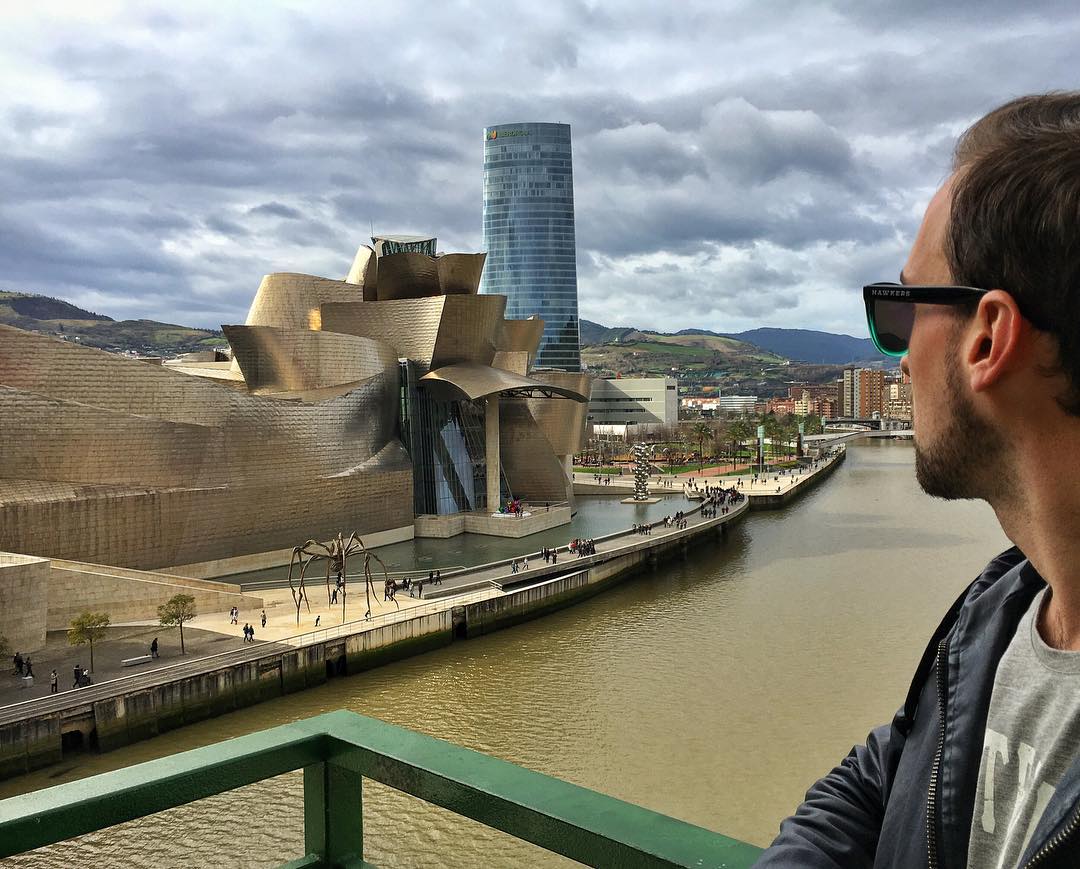 From every angle, the Guggenheim Bilbao Museum is just amazing. This view os from Puente de La Salve •🔷• 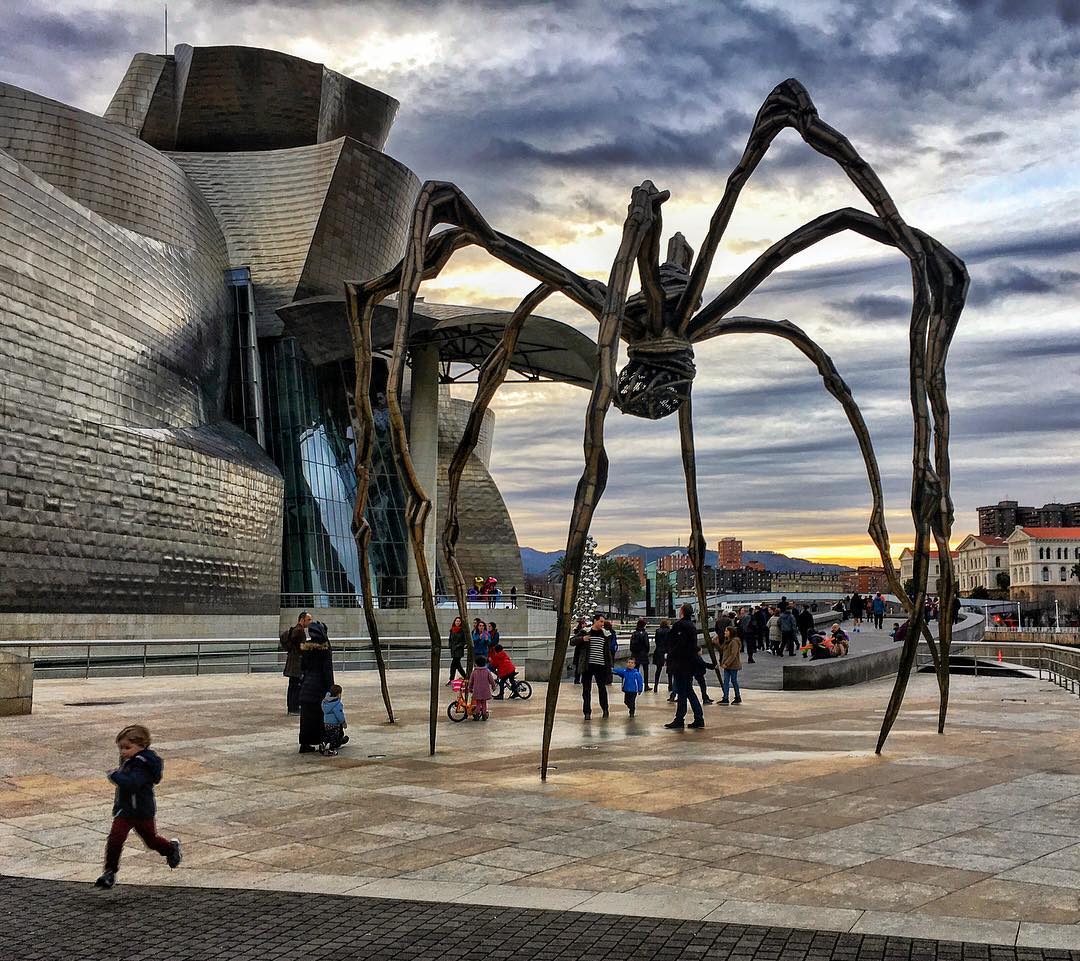 This spider statue is called «Mamá» and its very well known next Guggenheim Bilbao Museum. Walk and walk and walk…Ahead and ahead and ahead. No matter eight or two legs. Matter one mind. Make your way. Your exclusive way. You only live once. Today will only happen today. Tomorrow will be always unique. Cause yesterday was already today •🕷• 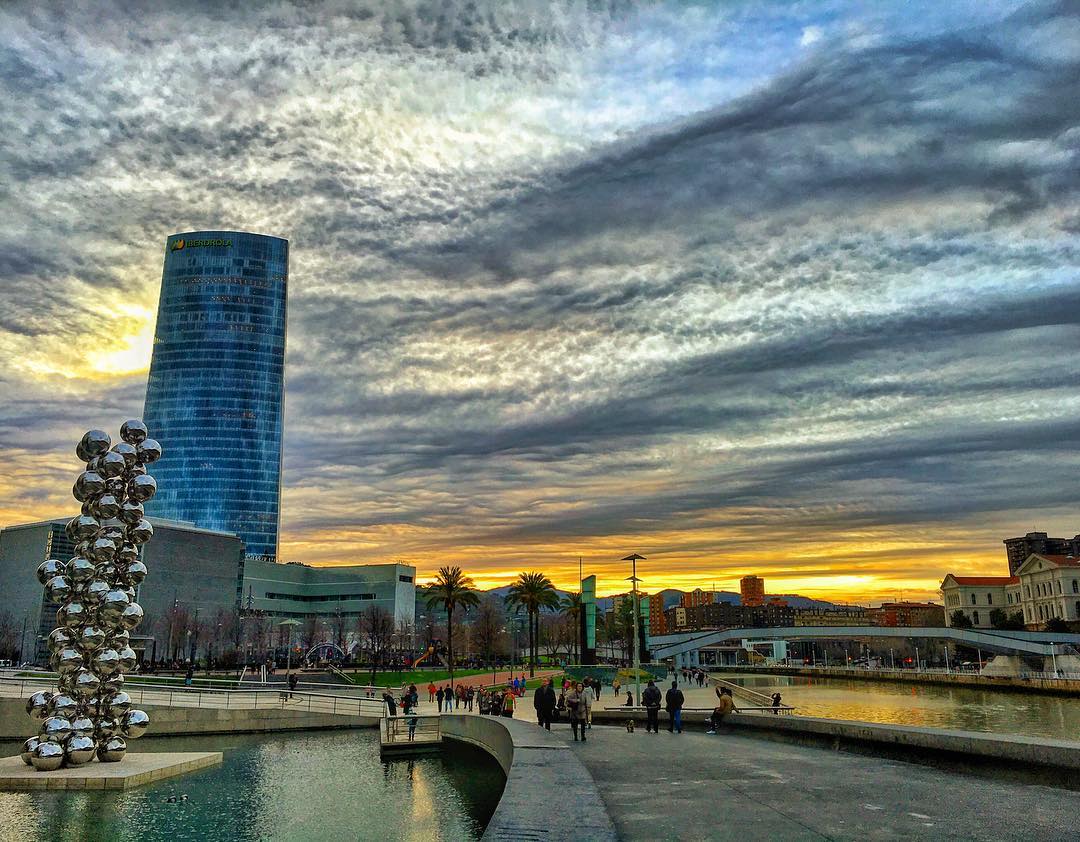 Shapes of titanium from the Guggenheim Bilbao Museum attract you like a magnet, to end the day alongside him, enjoying sky and sunset •⚙• 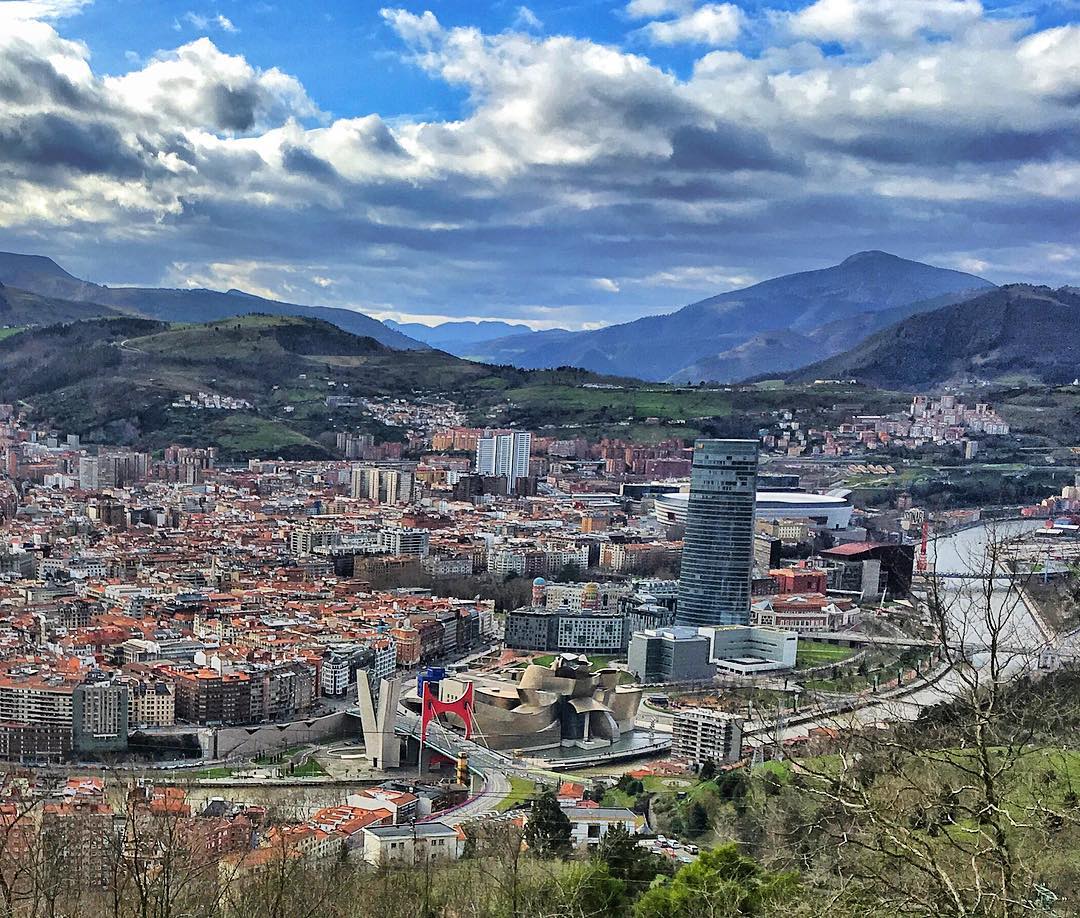 Passing by the Euskadi Plaza you are already next to the Guggenheim Bilbao Museum which is a must to visit around. Then, crossing the Zubizuri bridge you will find the Funikular Plaza. Just 1,90€ to go up and down to the Mount Artxanda. Here, all Bilbao for you! •🚠• 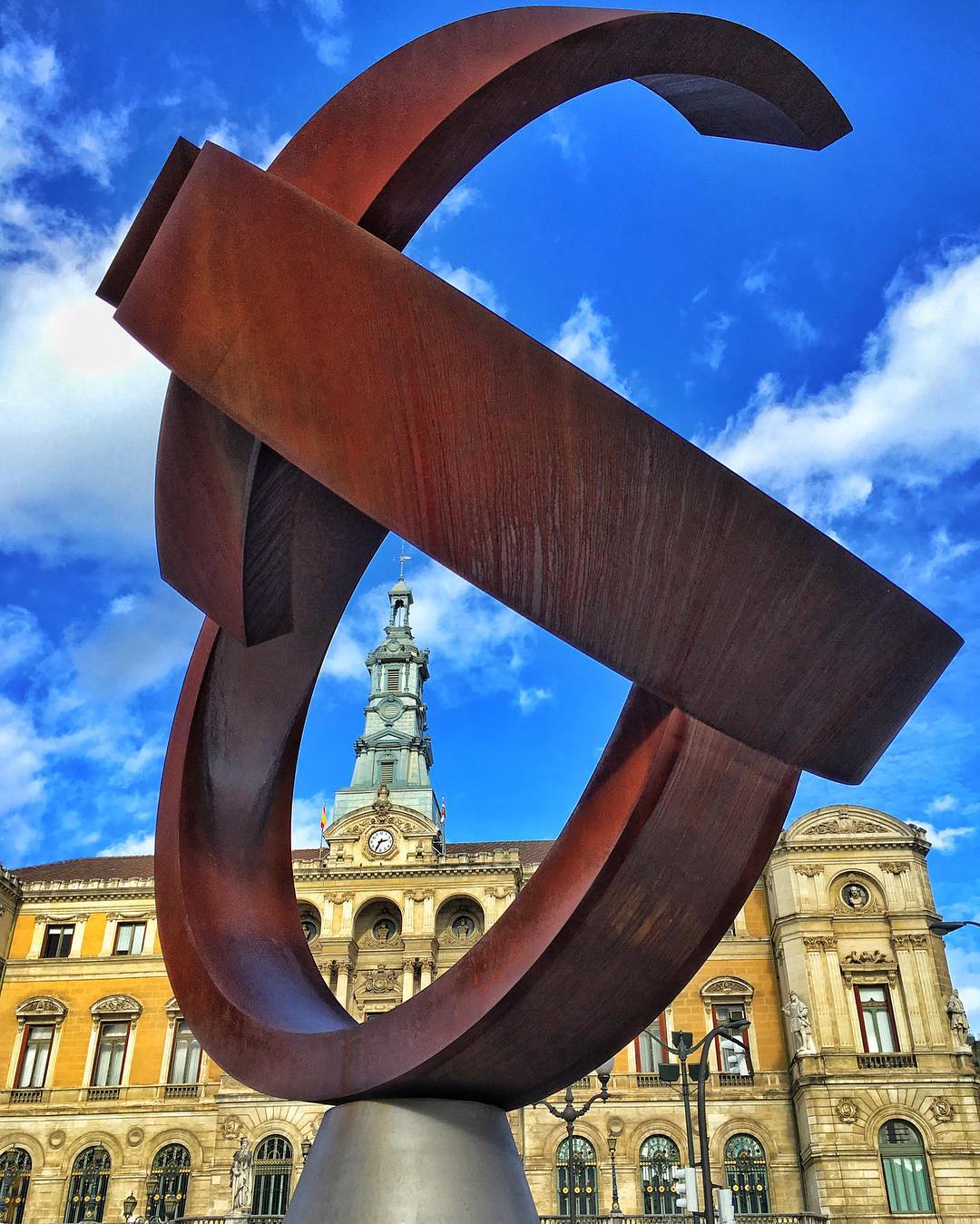 After enjoying the panoramic views from Mount Artxanda, keep on walking by the north side of Nervión River until finding the former City Hall. Bilbao City Hall occupies the site of the old San Agustín convent which was destroyed during the First Carlist War. It was built in 1892, the late nineteenth century, by the municipal architect Joaquín Rucoba, who also designed the Arriaga Theatre. Built in the French Second Empire style, the building is noted for its horizontal, elegant and round lines. The luxurious interiors combine the Neo-Renaissance inspiration of the assembly hall, the lobby or the staircase with the exquisite Neo-Arab style of the reception room •💢• 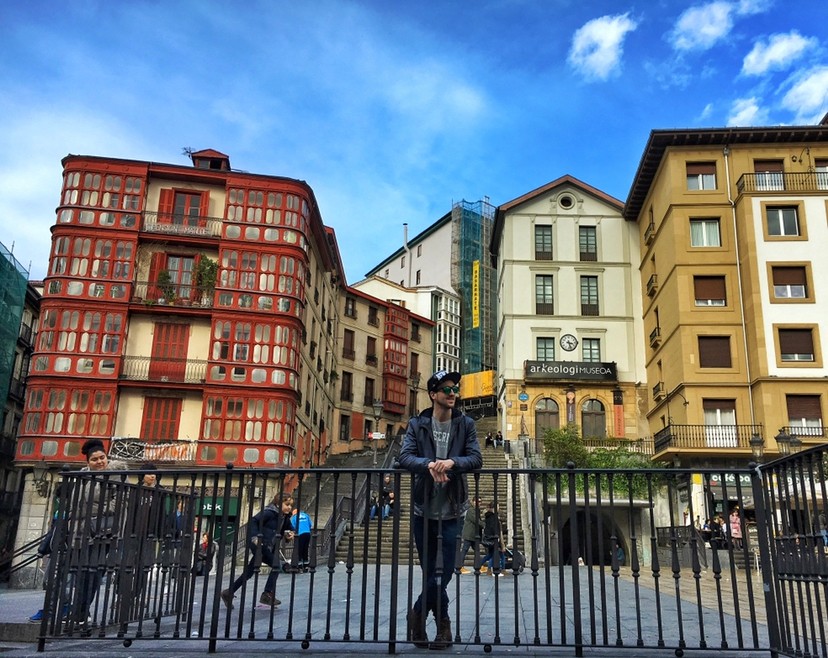 This square is dedicated to the famous writer Miguel de Unamuno, who was born in Bilbao in 1864 and later was named «Favorite Son» of the city in 1934. 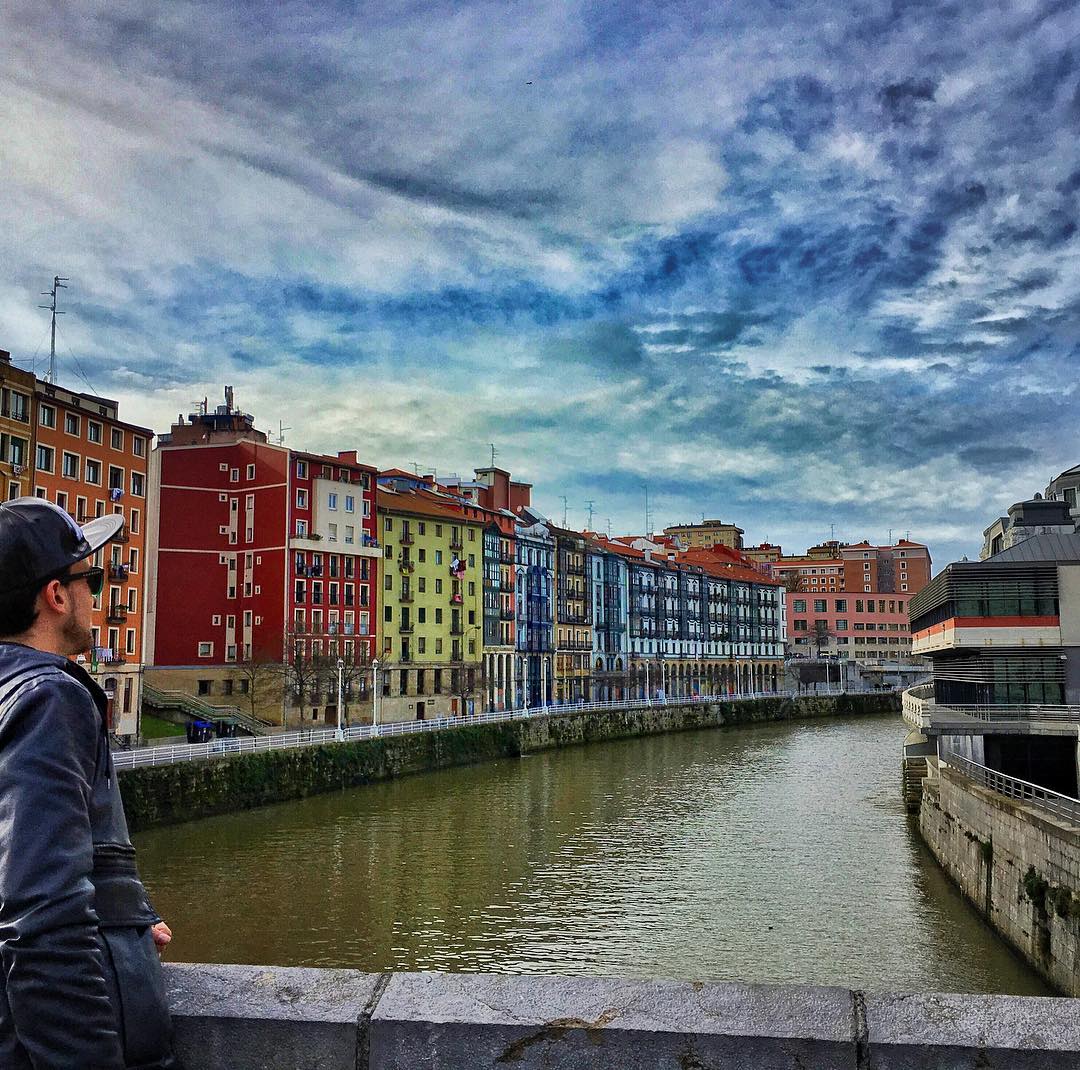 Worth it to come until Puente de San Antón to see the colorful buildings along the river and walk through all the charming old town. 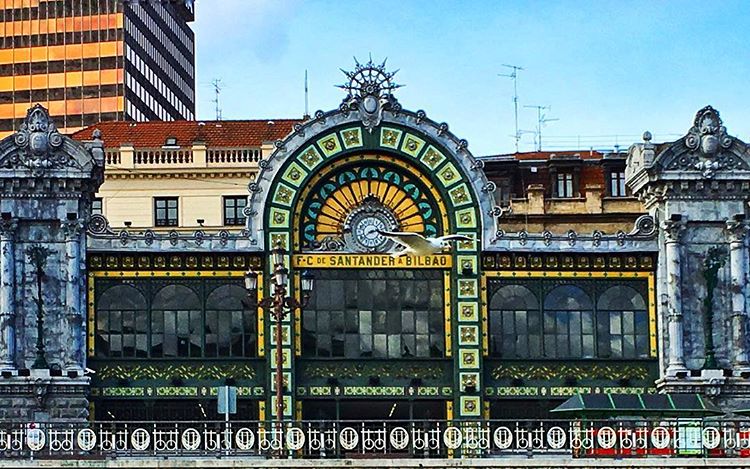 Get train and fly. Following the Nervión River to the south from the Bilbao City Hall you will get the Old Town, where the train station will immediately attract your attention. Parallel to the river, the front of the railway station that links Bilbao to Santander for many years, broke up the industrial look of the city with a touch of romance. It was inaugurated in 1902, with a modernist style characterized by the use of ceramic, glass and wrought iron. It provides one of the best viewpoints over the river •✳️• 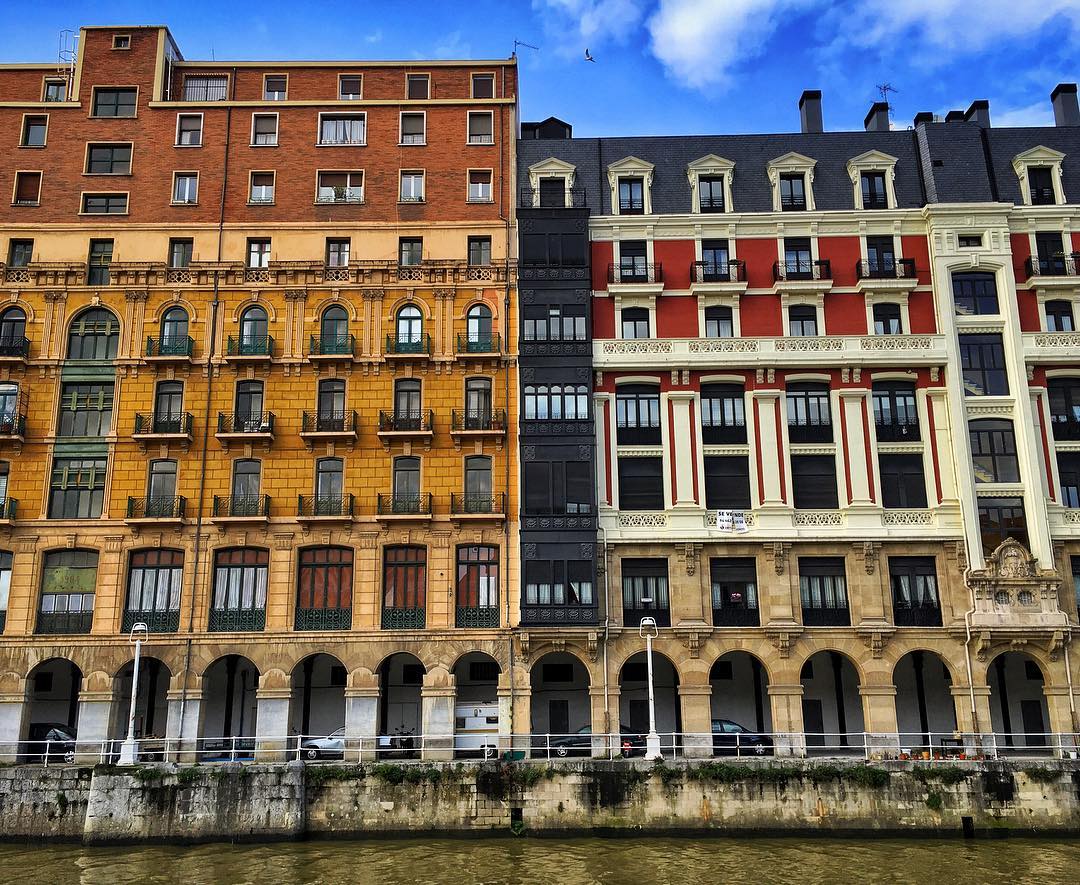 Still exploring the Old Town you can walk down the shore of Nervión River until the Mesedeetako bridge, where is a great moment to go into the streets and find many different bars to eat very good pintxos in all the southwest area of Plaza Nueva. On the way, you will find lovely architecture •⚜• 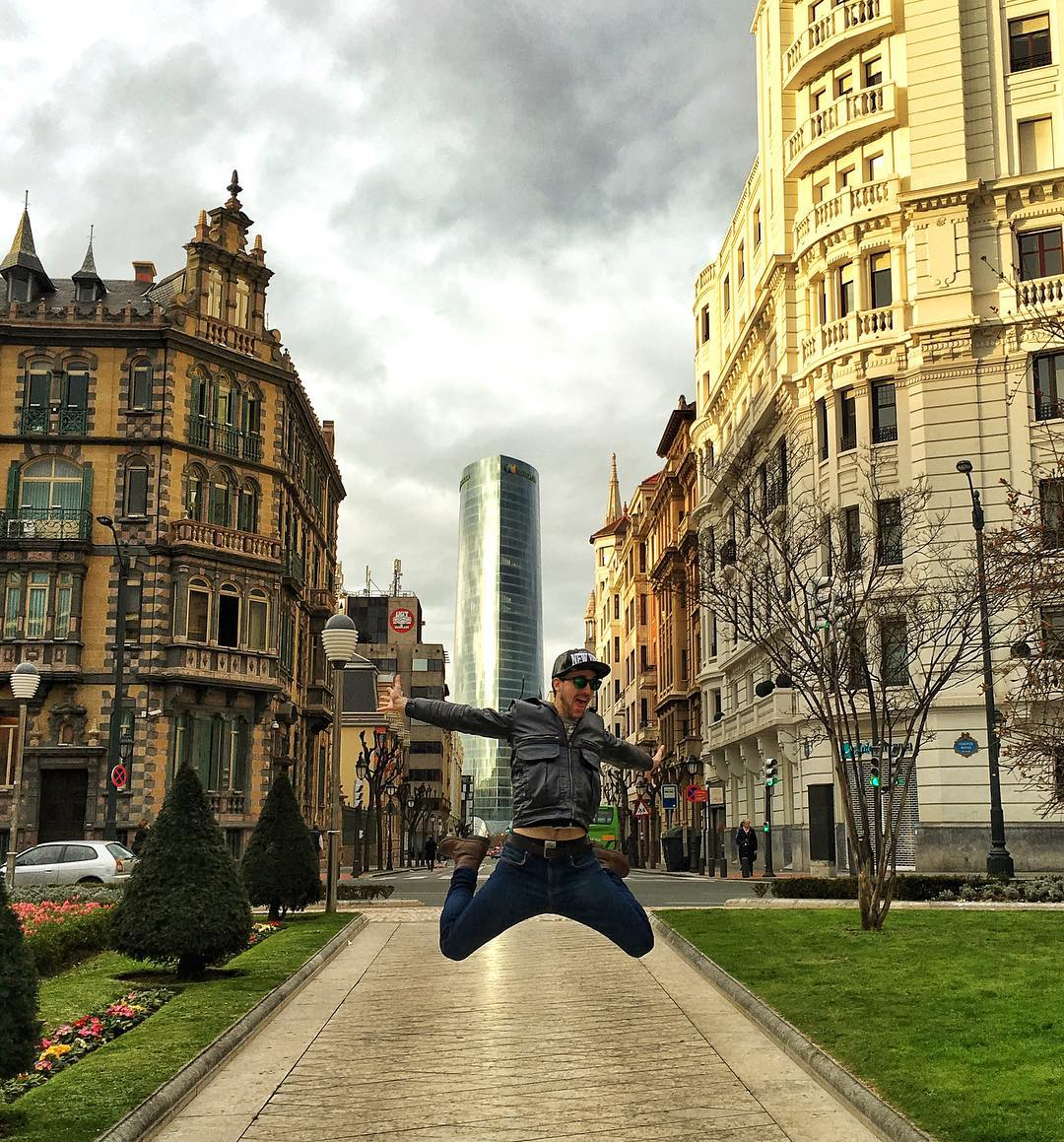 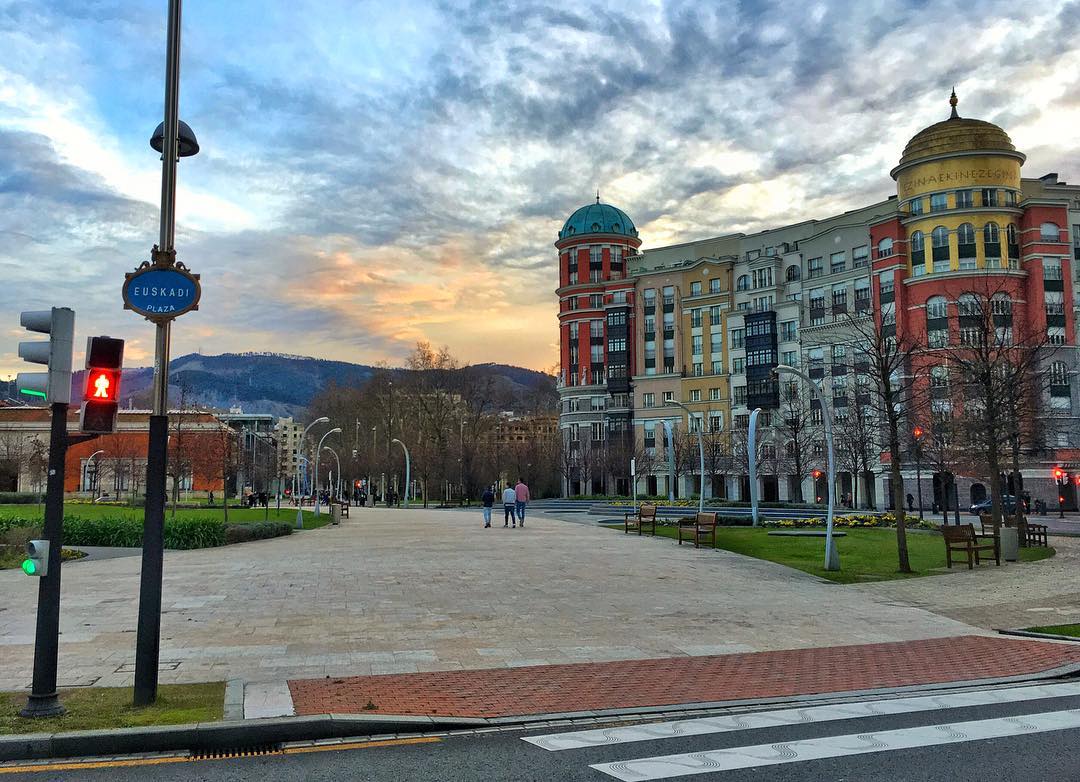 From west to east, following the Nervión River you can find a nice park called Doña Casilda de Iturrizar Park. Then, across the park, you will get the Euskadi Plaza, where enjoy some of the genuine architecture of Bilbao •🚷• 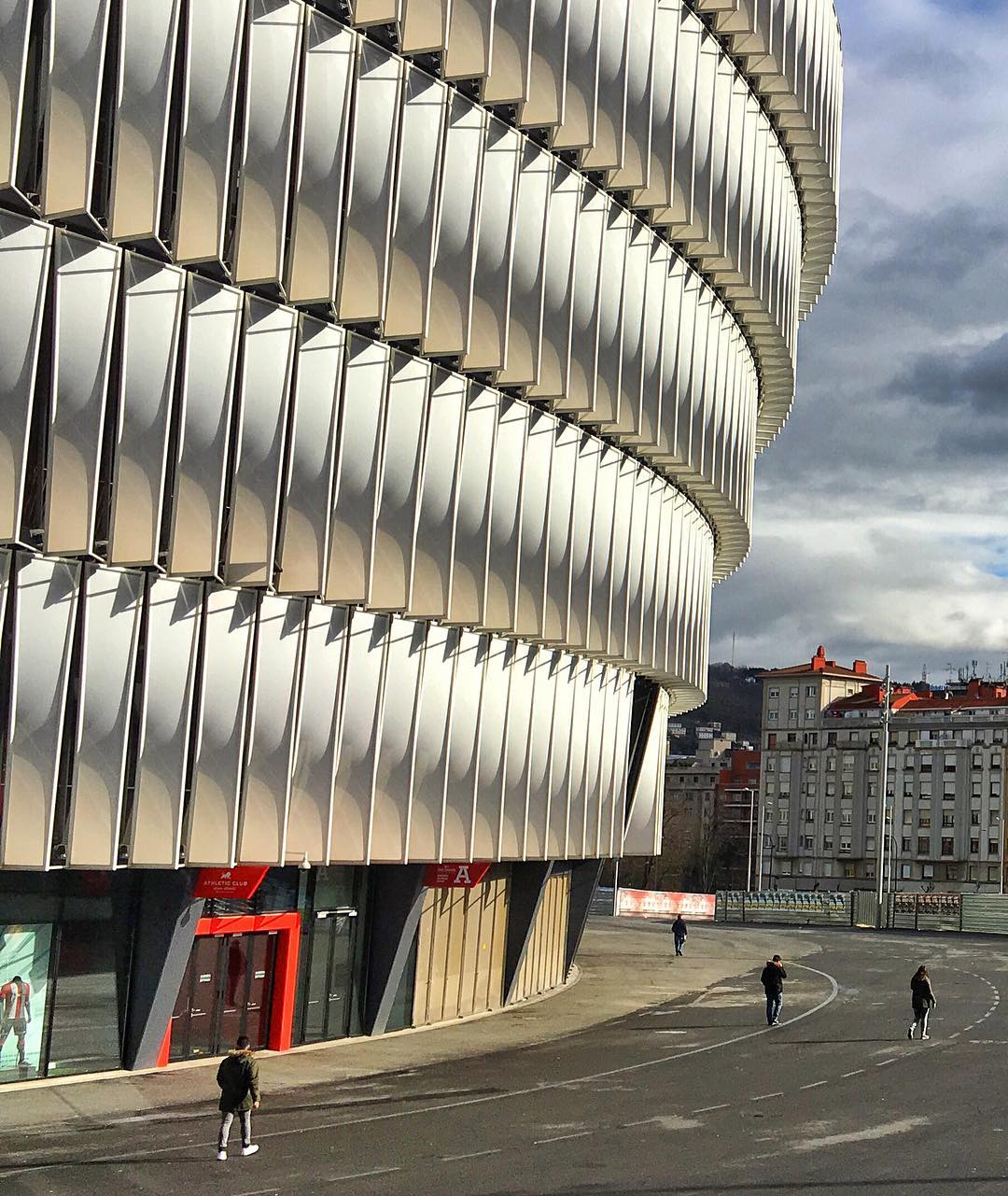 Next to the Parque de Doña Casilda de Iturrizar its located the football stadium San Mamés, in the western part of the city. The new stadium is designed with a permeable ETFE façade, which creates a constant interaction between the inside of the stadium and the public spaces around. Known as the Cathedral, an innovative lighting solution allows the panels to be lit up and animated, creating a glowing reference that is seen from within the city and from the surrounding hills •◻️•