05.00am – Early wake up to get the tickets for Angkor Temples.

We managed everything the previous day. Our tuk-tuk driver called “John” was waiting for us at our hostel. 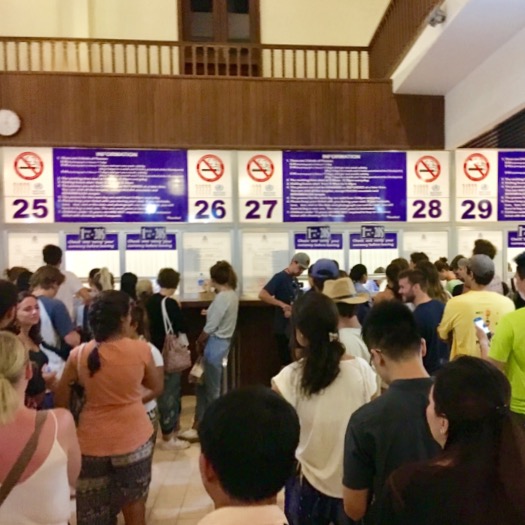 Tickets for the entrance in the complex of the Angkor Temples have to be purchased in a specific place. The ticket price for one day is 20 dollars, three days 40 dollars and seven days 60 dollars. 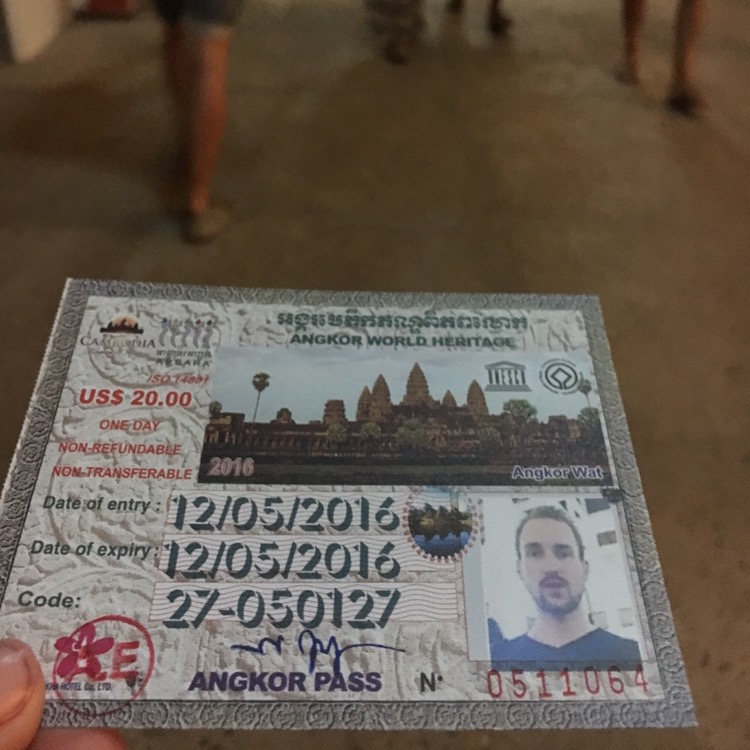 «Advice» Check official websites as I think the prices were increased by the government of Cambodia.

Angkor Wat will take you around 2/3 hours to explore the whole complex. It will depend how many pictures you take and how many details you want to see. I loved this temple so much I would have spent one full day here! 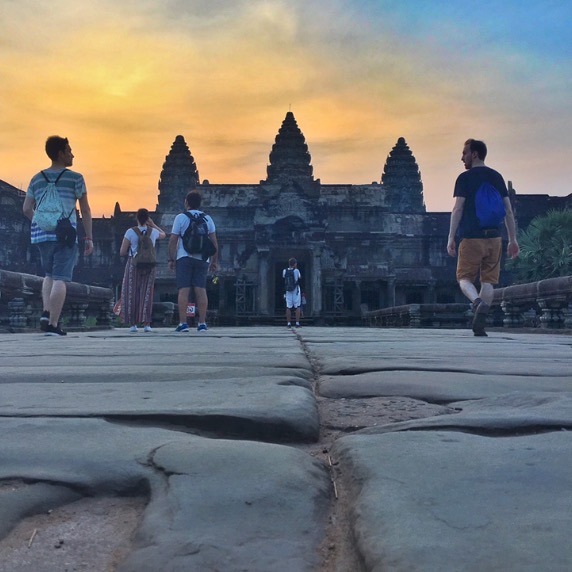 Open at 5am to see sunrise and close around 5.30pm. The peak season is from November to February, when weather is dry and cooler. Sunrise is the outstanding moment to get incredible views and to explore without the crowds.

Sunrise. WonderWorld. One of most unique and amazing places I have ever been to. Angkor Wat 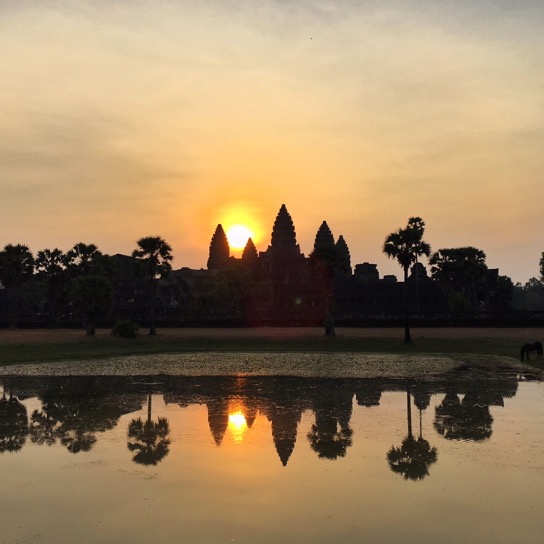 Angkor Wat is the largest religious monument in the world. Located near Siem Reap, it is a vast temple complex built in the 12th century by the king of the prosperous Khmer empire, with an estimated construction time of 30 years. Originally constructed as a Hindu temple dedicated to Vishnu, gradually transforming into a Buddhist temple at the end of the 12th century 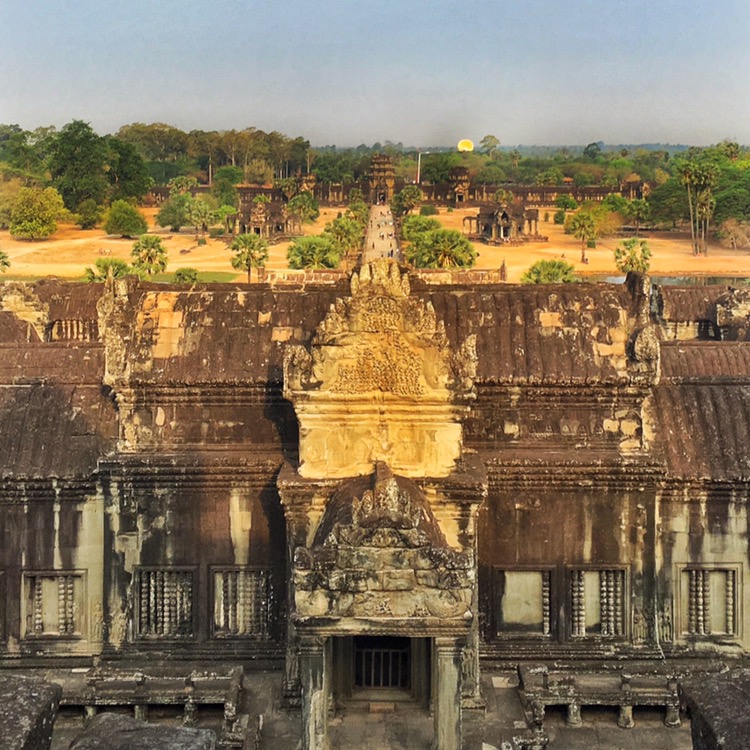 Angkor was the capital of the Khmer Empire from the 9th to the 15th centuries. The Khmer Empire was one of the most prosperous and sophisticated kingdoms in the history of Southeast Asia, and its prosperity was expressed through a wide range of architecture 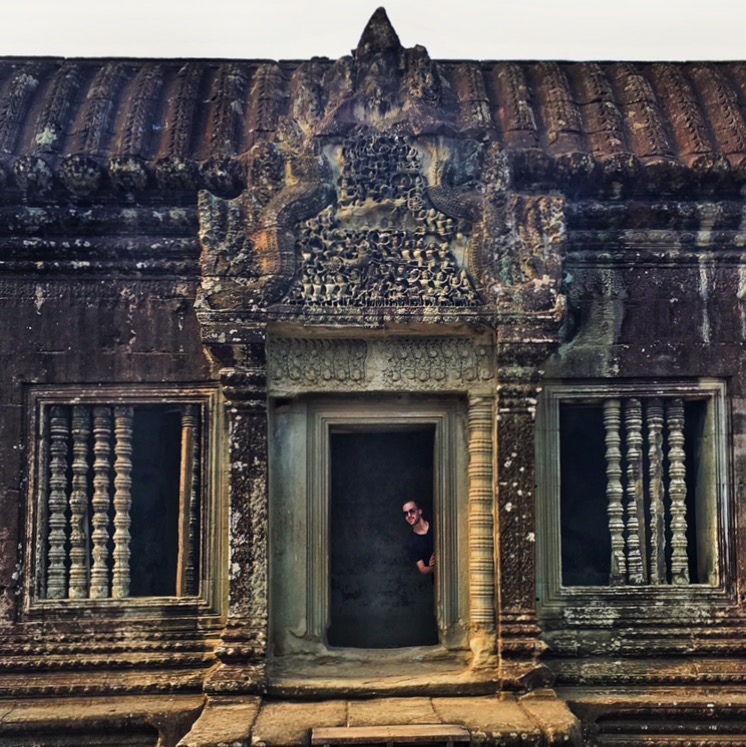 Carved into its walls, Angkor Wat has more than 3.000 beguiling apsaras (heavenly nymphs). Each of them is unique, and there are 37 different hairstyles for budding stylists. 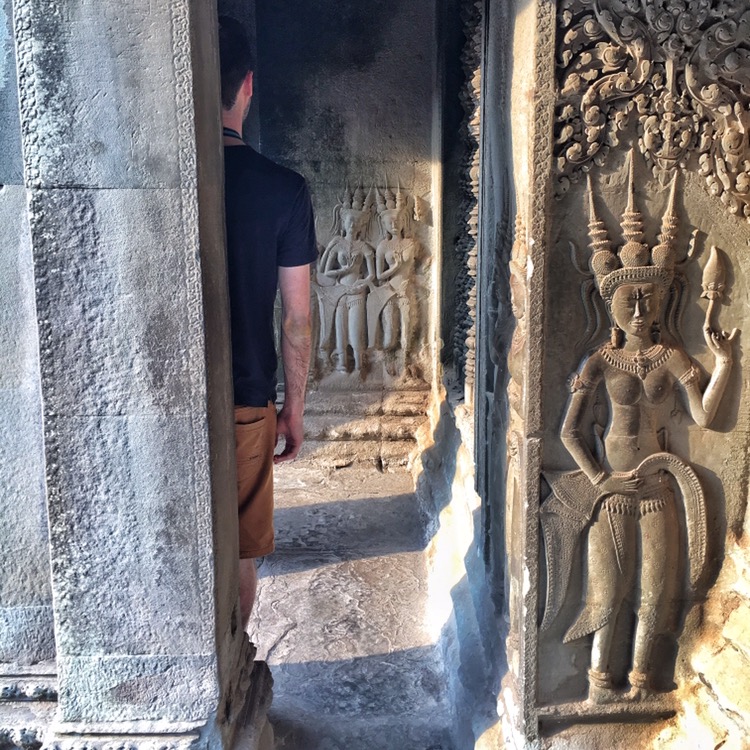 Angkor Wat is the representation of Mt Meru, the Mt Olympus of the Hindu faith and the abode of ancient gods. The Cambodian god-kings of old each strove to better their ancestors’ structures in size, scale and symmetry, culminating in what is believed to be the world’s largest religious building.

Traveling with a friend is traveling back, again and again, every time you see each other. Traveling by memories, experiences and laughs. «Do you remember when…». «This reminds me to…». I am missing…».  There is something better in life than travel&friends ! 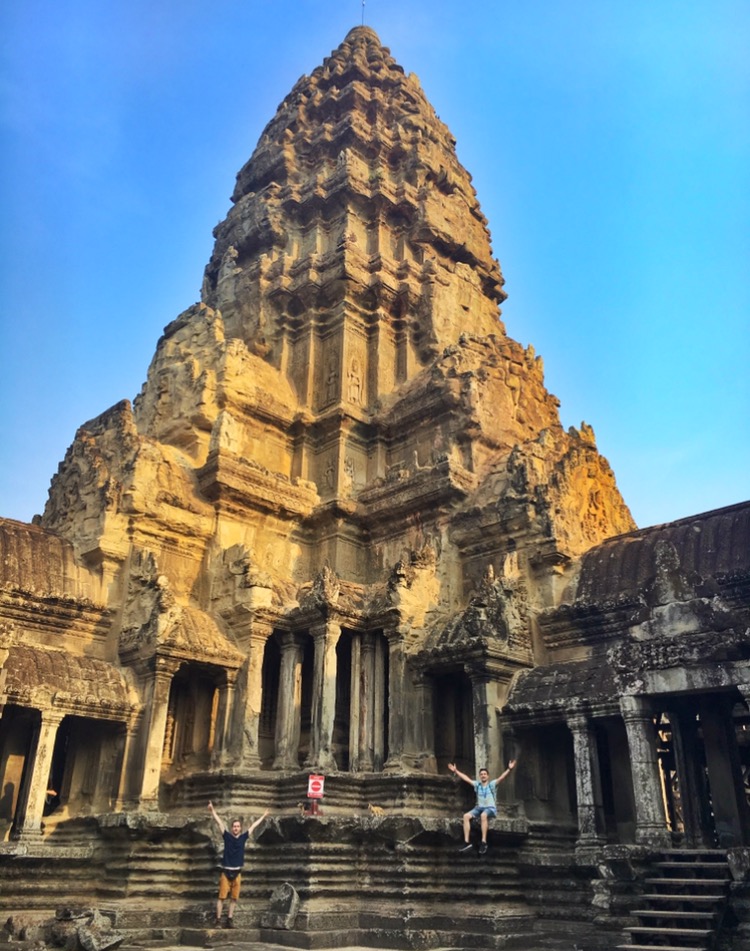 Angkor Wat is surrounded by huge a moat and an exterior wall measuring 1300×1500 meters. The temple itself is 1 km square and consists of three levels surmounted by a central tower. The walls of the temple are covered inside and out with basreliefs and carvings. Nearly 2000 distinctively rendered apsara carvings adorn the walls throughout the temple and represent some of the finest examples of its era art 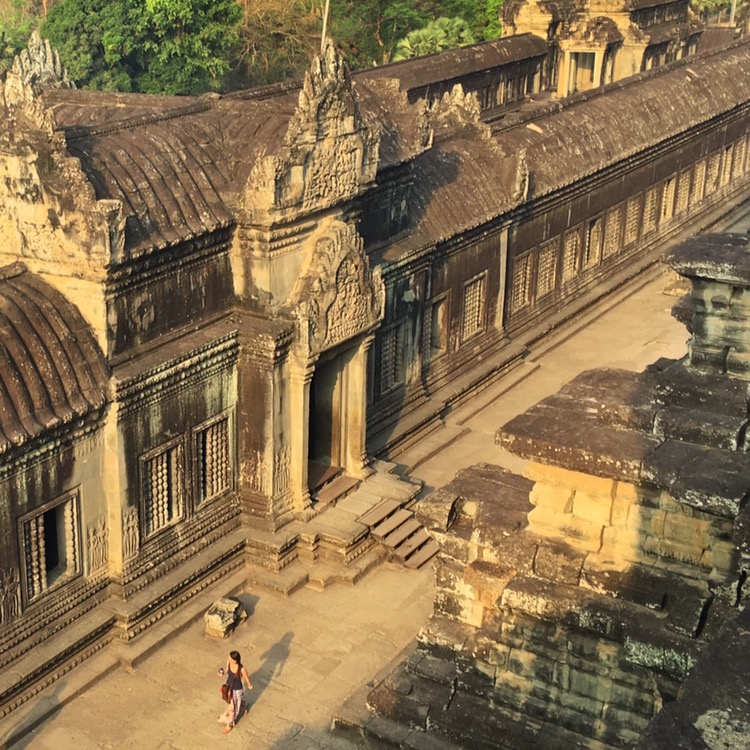 The Angkor Wat temple is made from 6 to 10 million blocks of sandstone, each of which has an average weight of 1.5 tons. The city of Angkor required more stone than all the Egyptian pyramids combined, and originally occupied an area considerably greater than now Paris. The cambodians have transported all the stones from a mountain by creating a canal system of 40 kilometers, with elephants, ropes, pulleys and bamboo.

Inside Angkor Wat. As big as impressive. Where the old magnificence provide us with new feeling. 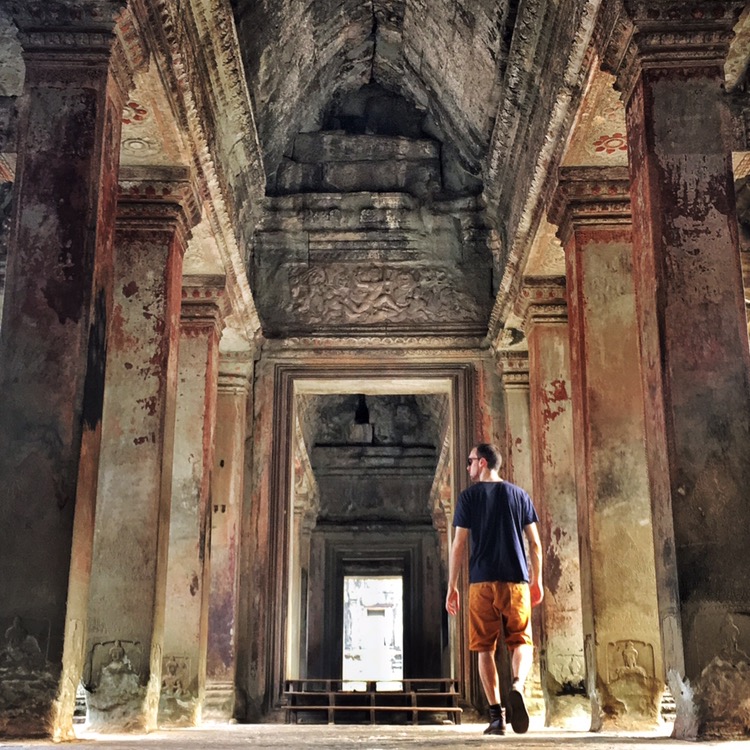 Some inscriptions explained the construction of Angkor Wat, which involved 300.000 workers and 6.000 elephants, at least. From 6 to 10 million stones. Each stone around 1.5 tons. Each stone transported by water canals 40 kilometers

Before getting into the complex of Angkor Wat there is the «Angkor Cafe», a modern restaurant (with air conditioning) where you can find drinks, sandwiches, pizza and much more.

Going to Angkor Thom, the second complex temple in importance and the last capital of the Khmer Empire.

Symbolically, Angkor Thom is a microcosm of the universe, divided into four parts by the main axes. The temple of the Bayon is situated at the exact center of the axes and stands as the symbolical link between heaven and earth. The wall enclosing the city of Angkor Thom represents the stonewall around the universe and the mountain ranges around Meru. The surrounding moat symbolizes the cosmic ocean. 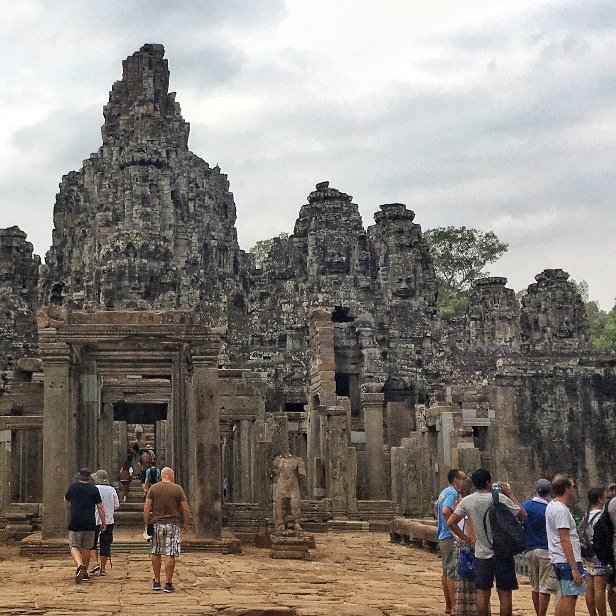 The city of Angkor Thom consists of a square, each side of which is about 3 kilometers long a laterite wall 8 meters in height around the city encloses an area of 145.8 hectares. A moat with a width of 100meters surrounds the outer wall. An entry tower and along causeway bisect each side of the wall except on the east where are two entrances. The additional one, called the «Gate of Victory «is aligned with the causeway leading to the Terraces of the Elephants and the Leper King. A small temple known as «Prasat Chrung’ stands at each corner of the wall around the city of Angkor Thom. 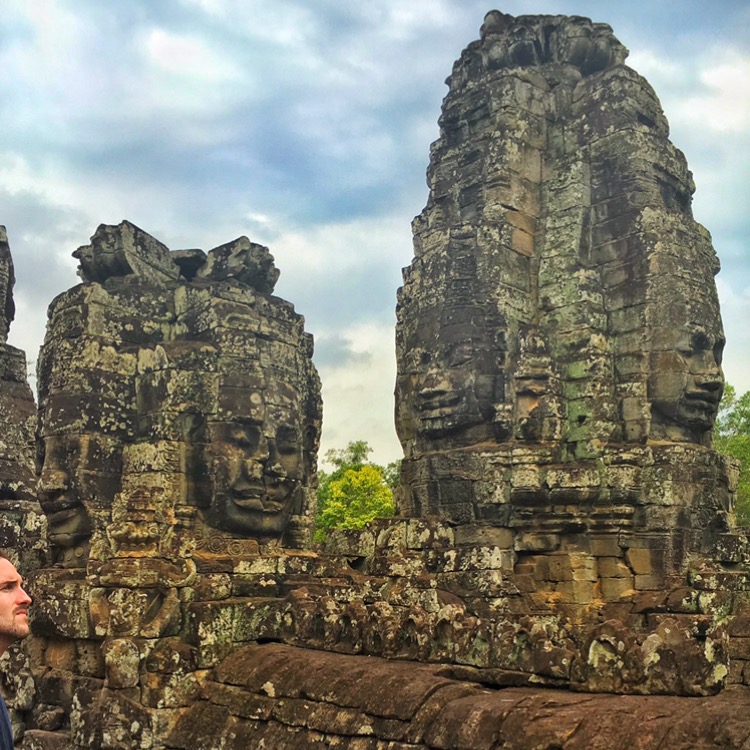 The Bayon Temple was built at the end of the 12th century by Jayavarman VII, one of the Khmer Empire’s greatest king. 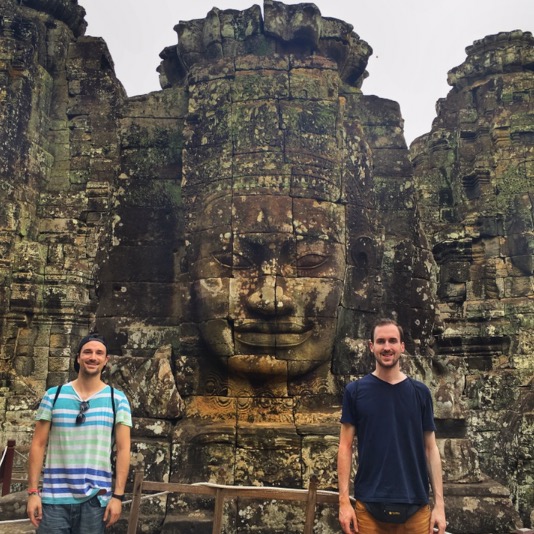 Over 200 large faces carved on the 54 tower give this temple its majestic character. It is generally accepted that four faces on each of the tower are images of the bodhisattva Avalokitesvara and that they signify the omnipresence of the king. The characteristics of this faces, a broad forehead, downcast eyes, wild nostrils, thick lips that curl upwards slightly at the ends combine to reflect the famous ‘Smile of Angkor’. 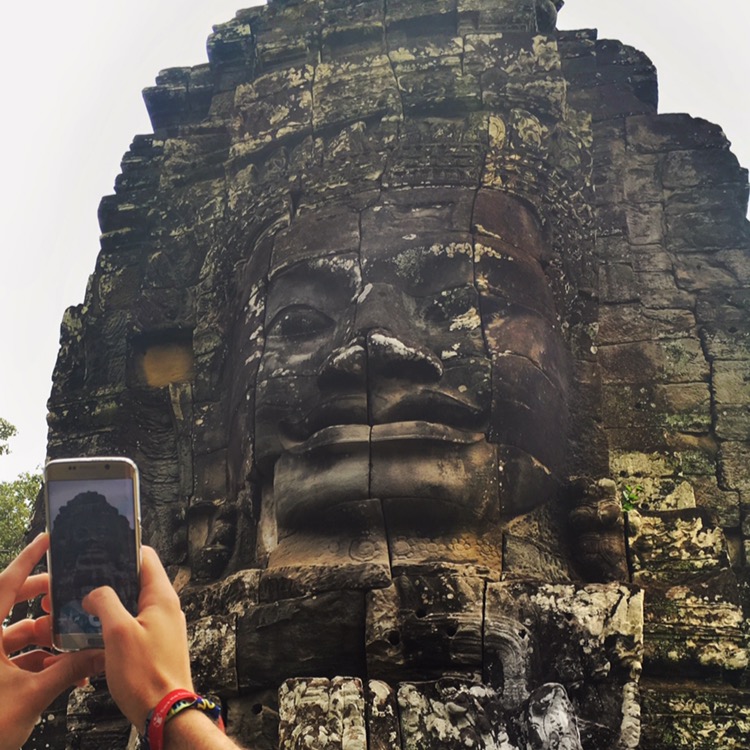 The reliefs on the walls of the inner gallery depict Hindu deities, including Brahma, Vishnu and Shiva, as well as scenes from Hindu mythology. In total, there are more than 11,000 carved figures over 1.2 km of wall. The bas-reliefs on the outer gallery are a marked departure from anything previously seen at Angkor. They contain genre scenes of everyday life-markets, fishing, festivals with cockfights and jugglers and so on-and history scenes with battles and processions. The relief are more deeply carved than at Angkor Wat but the representation is less stylized. 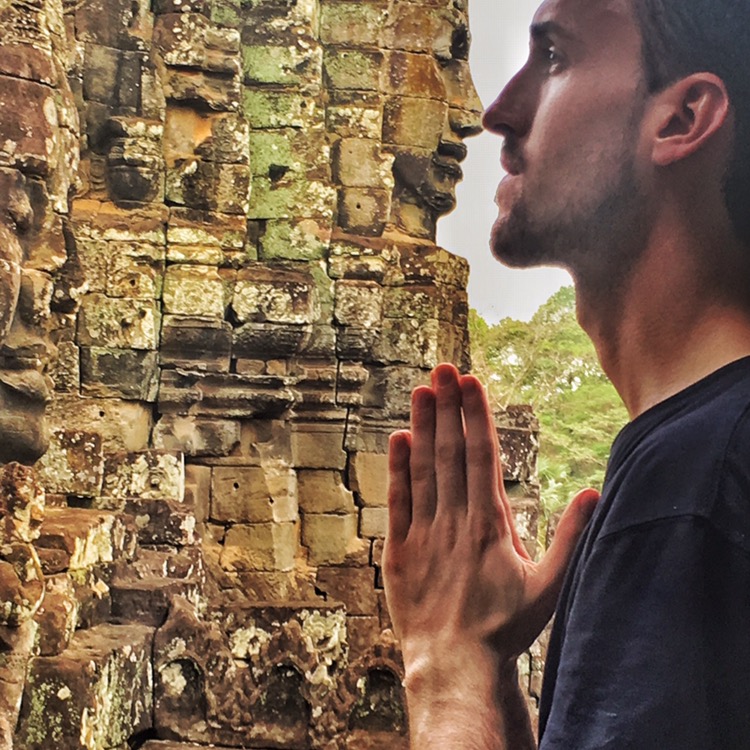 Each stone 1.5 tons. From 6 to 10 million stones. Transported by canals 40 kilometers

Terrace of the Elephants

It is on the way from Angkor Thom to Bayon Temple. The Terrace of the Elephants is part of the walled city of Angkor Thom and was used by Angkor’s king Jayavarman VII as a platform from which to view his victorious returning army. It is an impressive, two and a half-meter tall, 300 meter long terrace wall adorned with carved elephants and garudas. 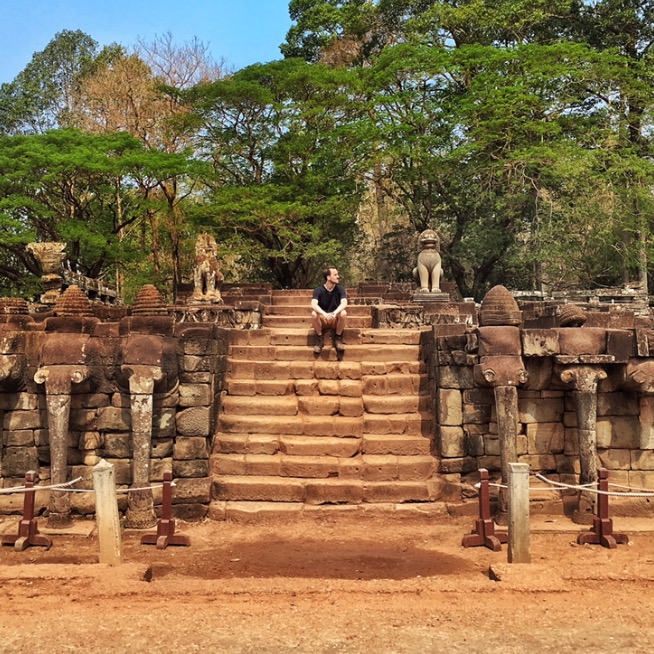 On the way to Ta Prohm Temple. Coming from Bayon Temple, Angkor Thom. 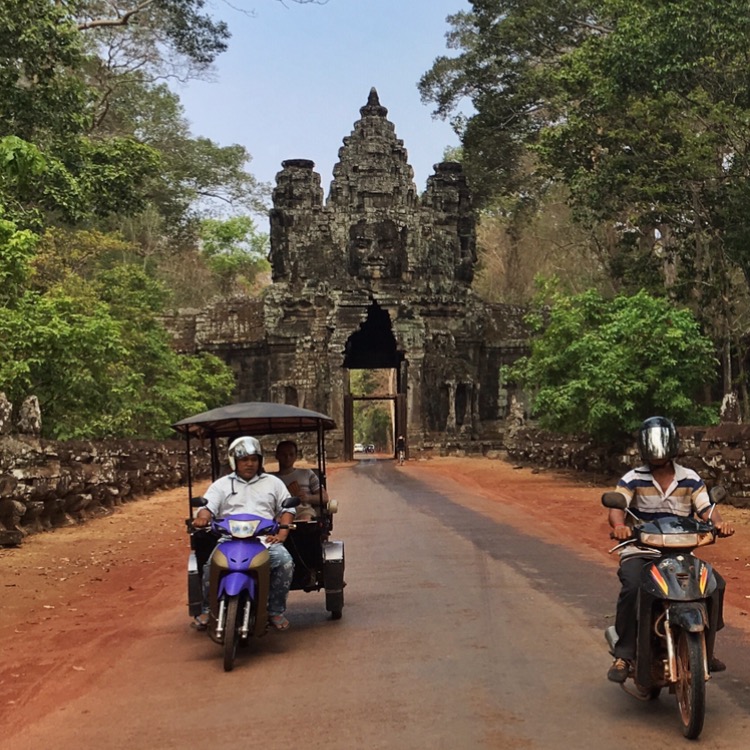 Ta Prohm is cloaked in dappled shadow, its crumbling towers and walls locked in the slow muscular embrace of vast root systems. Ta Prohm appeals lies in the fact that, unlike the other monuments of Angkor, it has been swallowed by the jungle, and looks very much the way most of the monuments of Angkor appeared when European explorers first stumbled upon them. 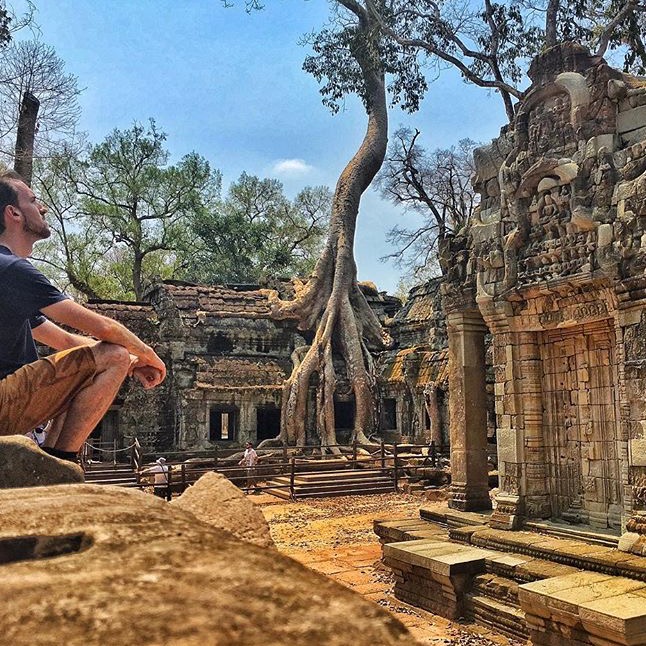 Visiting Ta Prohm is a unique, other-worldly experience. The feeling of the early explorers. There is a poetic cycle to this venerable ruin, with humanity first conquering nature to rapidly create, and nature once again conquering humanity to slowly destroy. If Angkor Wat is testimony to the genius of the ancient Khmers, Ta Prohm reminds us equally of the awesome fecundity and power of the jungle. 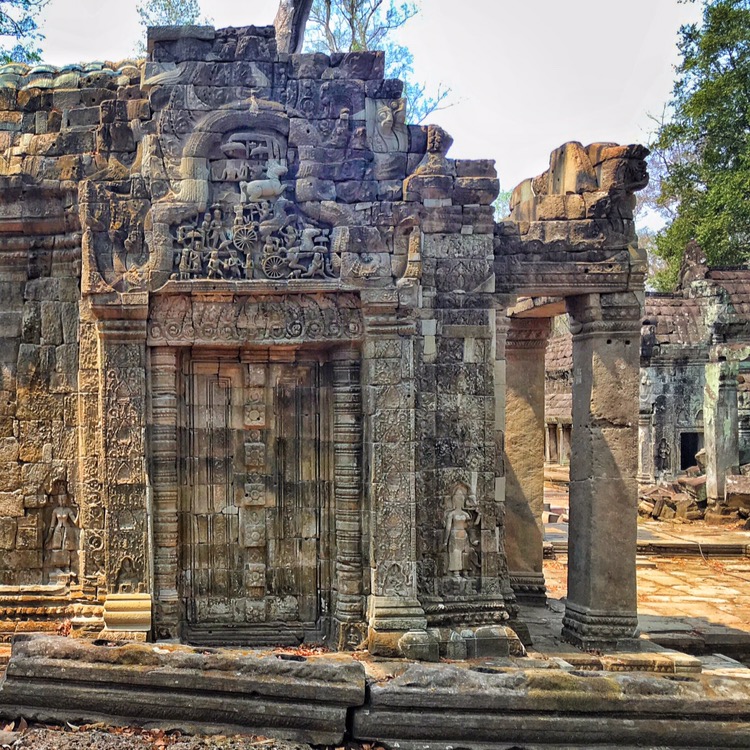 A Sanskrit inscription on stone, still in place, give details of the temple. Ta Prohm 3,140 villages. It took 79,365 people to maintain the temple including 18 great priests, 2,740 officials, 2,202 assistants and 615 dancers. Among the property belonging to the temple was a set of golden dishes weighing more than 500 kilograms, 35 diamonds, 40,620 pearls, 4,540 precious stones, 876 veils from China, 512 silk beds and 523 parasols. Even considering that these numbers were probably exaggerated to glorify the king, Ta Prohm must have been an important and impressive monument.

Not enough words to describe the feelings of discovering all these temples. You should try personally. This is unique 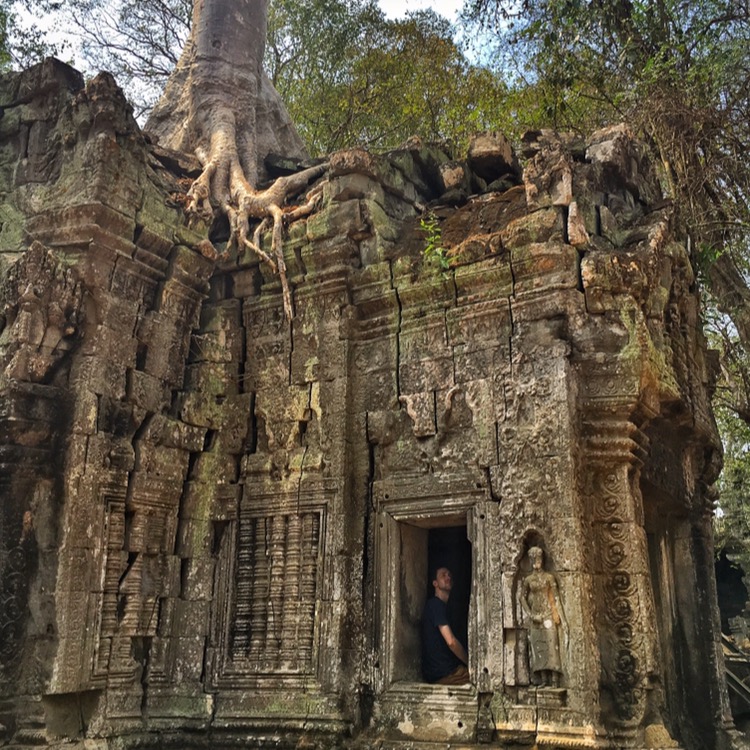 Ta Prohm is a temple of 39 towers, closed courtyards and narrow corridors. Many of the corridors are impassable, clogged with jumbled piles of delicately carved stone blocks dislodged by the roots of long-decayed trees. Bas-reliefs on bulging walls are carpeted with lichen, moss and creeping plants, and shrubs sprout from the roofs of monumental porches. Trees, hundreds of years old, tower overhead, their leaves filtering the sunlight and casting a greenish pall over the whole scene 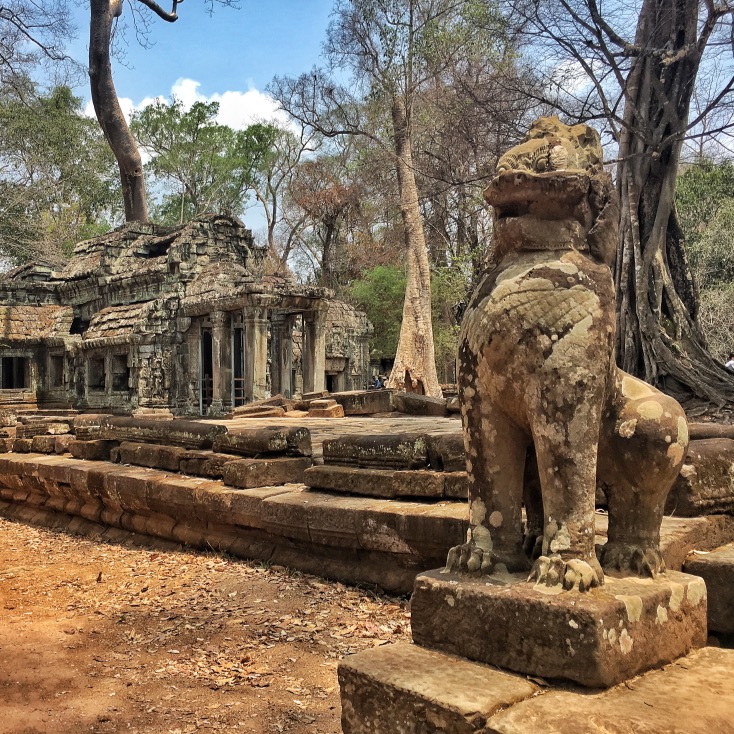 It ends our journey into one of most wonderful things in the world, Angkor Temples. We are leaving, but trees and stones will still stay here, waiting for you, for hundreds year more.

Please say hello to our tuk-tuk driver during the whole day, John! 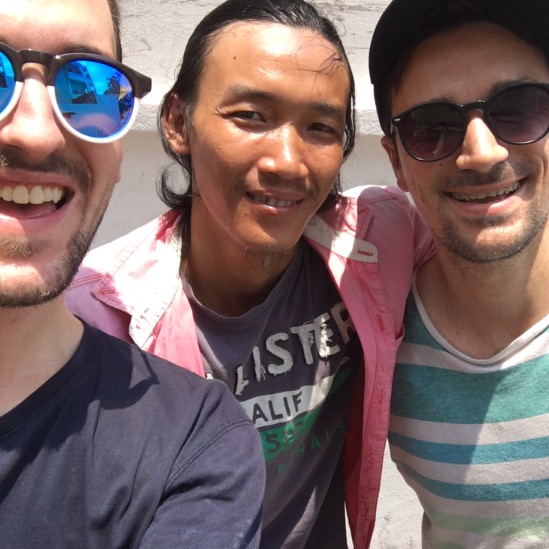 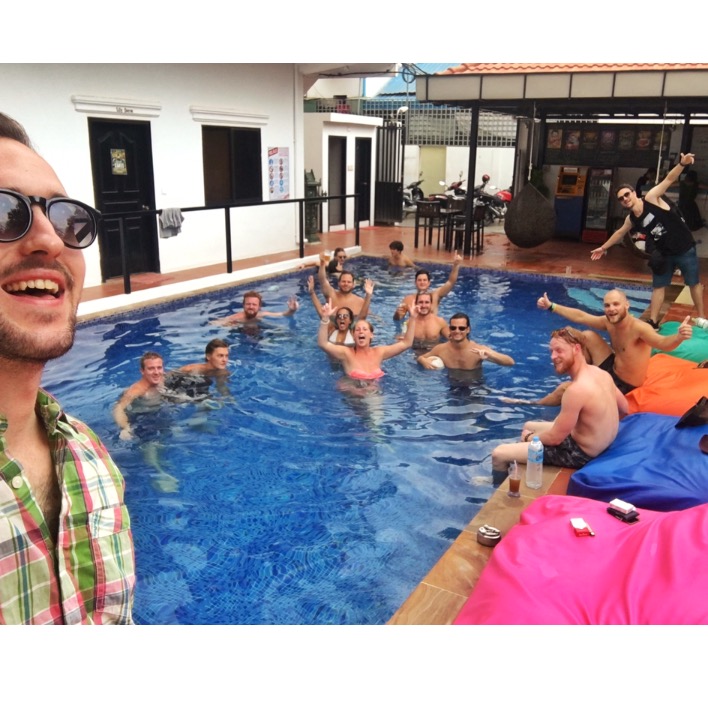 8.00pm – Dinner at The World Lounge in Pub Street.

Crocodile burger and crocodile pizza. The draft beer was 1 dollar (same as many places). 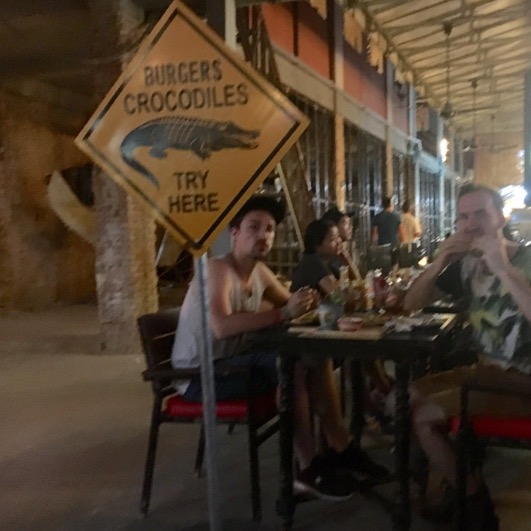 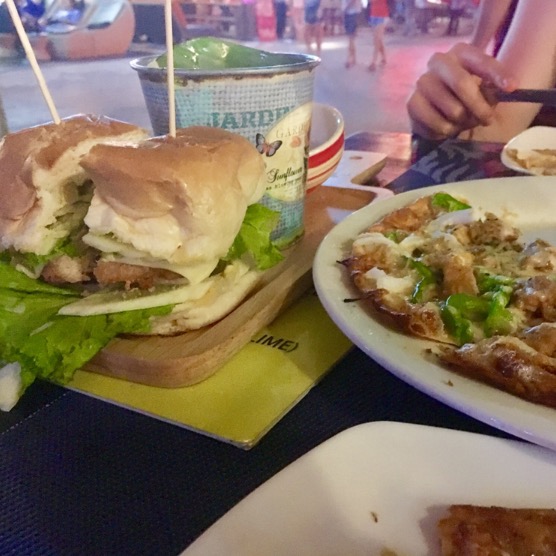 Party at the hostel and we moved to the bars of the city centre. We do recommend Angkor What and Temple Bar, one in front to each other.